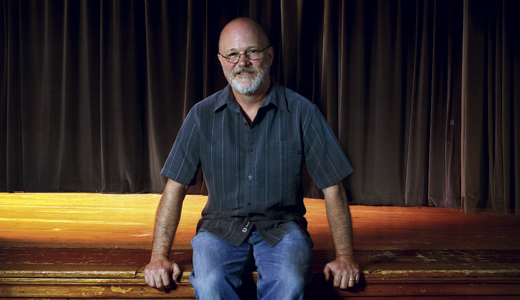 John Harris moved to Louisville from Dayton, Ohio, in 2010 to turn Clifton’s neighborhood events center into something a bit more global. As executive director of the Clifton Center, he wears many hats. The most visible and arguably most important is as the programmer of an ongoing series of concerts, movies, discussions, art, and whatever else is relevant to understanding and enjoying the culture of both native Louisvillians and the world outside.

“We think of it as a neighborhood facility, but it’s for everybody,” Harris says. “We’re not trying to attract (a) particular demographic — we’re trying to attract everybody that’s interested in experiencing new art and new music.”

The Lexington native and erstwhile French horn player moved around in his younger days, trying to find the perfect fit for his love of arts, culture and nonprofit work, including three years at Eastern Kentucky’s famed Appalshop. Harris attributes that experience to helping shape his view that “the arts can be in service to a great thing” beyond mere entertainment.

Harris built a program there called Culture Builds Community, with artist residencies working in different neighborhoods. It began in an area filled with a large Appalachian population and grew to multiple areas, bringing music and art to underserved communities.

Harris and his wife, Natalie, “… liked Dayton a lot, but we said, ‘We’re not going to stay here forever.’” After his father died, he wanted to be closer to his mother in Lexington, “and it just so happened, we were in (Louisville) visiting some friends, and somebody said, ‘Oh, did you hear that so-and-so left the Coalition for the Homeless?’” Everyone turned to Natalie, who has worked with the homeless for many years.

Once in Louisville, “I saw this ad, and I thought, ‘Oh, that could be kind of interesting.’” The more he looked into the Clifton Center, the more interested he became.

The plan is to expand, with more shows in more rooms, and more visual arts. “My idea is to position ourselves as a genre-less presenter,” Harris says. “We really believe in good music of all different kinds, and we think there are audiences for that. And it’s the kind of place that we want to be.”