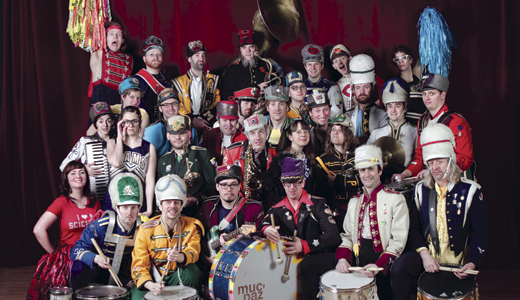 Last week, My Morning Jacket played their first Forecastle. This week, Mucca Pazza finally plays Lebowski Fest. It’s the other most perfect marriage of spirit, soul and sound to be found around these parts. For those who have somehow missed the Chicago-based marching big-band with the circus-punk attitude, this setting is the most appropriately absurd, celebratory and comically relaxed way to enjoy their show. Their latest album, Safety Fifth, was released last month. LEO emailed with three of the two-dozen members.

LEO: Can you name three other bands who are similar to you?

Jeff Thomas: The New York Philharmonic, because we have more than four people in our band. R. Kelly, because we are both from Chicago and have a certain sensuality in our music — though his is sexual, ours is more aromatic. Iggy Pop, because the stage isn’t big enough — we have to go out in the audience often.

LEO: You’ve been touring more in the past year and going farther away from Chicago. Is it any easier or harder to tour more?

JT: There are challenges in organizing a tour for 20-plus people, but those challenges are surpassed by the joy of showing a new audience what we can do. Maybe we inspire you to organize a big band of your own. Or in the case of your hometown children’s percussion group, the Louisville Leopards, arrange one of our songs to inspire children to create music.

Mark Messing & Gary Kalar: Harder in that it takes more breadcrumbs to find our way back. Easier in that at least there’s something to eat on the way home. And truthfully, it feels so good to play music every day, plus the added joy of making friends and allies across the country puts a lot of gas in the gas tank of the heart.

LEO: How do you tour? In a circus bus?

MM & GK: Actually, the real circus is in the tour planning. Our planning team are superstars. It must be like splitting atoms. They have to deal with various departure times and places, varied sleeping habits and diets and degrees of odors, and then, of course, the allergies. If someone we’re staying with has a cat, then you have to move the people with the cat allergies off the bus and into the special allergy van.

LEO: What types of jobs do the members have in their real lives?

JT: There is a nice mix of members who have what may be called “straight” jobs and those that may be called “freelance” jobs. This balance has afforded us the manpower and flexibility to tour and still maintain a regular group of musicians without needing to seek out new ones.

MM & GK: It’s like a little village: scientists, teachers, bartenders, programmers, dance instructors, carpenters, and full-time musicians. Having a band with a bunch of musicians would be just too hard!

LEO: You’re coming back for Lebowski Fest. How do you feel about the movie, collectively?

JT: I am reminded by the Whitman poem “Song of Myself,” where he states, … every atom belonging to me as good belongs to you. That movie and the poem are very much like our live show. It is a collection of singular experiences that are filtered and sifted to create a universal experience shared by everyone uniquely.

MM & GK: I’d say we all think that rug really tied the room together.