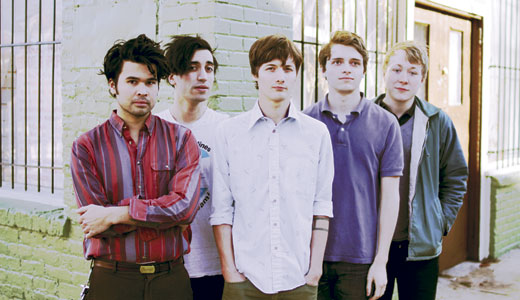 Lockett Pundt of Atlanta is having a busy and happy period in his life. His day job, playing guitar for the influential psych-rock band Deerhunter, continues to go well for him, and it also has allowed him to release two records on the side as Lotus Plaza. The latest, Spooky Action at a Distance, was released in April and finds Pundt becoming more confident in his own songwriting abilities.

“Initially, I had no audience in mind — or an actual audience — so there was no expectation on myself to write in any certain way or to have any sort of standard to live up to,” says Pundt today, “so I did what I wanted and was satisfied with whatever the outcome may have been.”

Pundt, whose personal taste runs toward the fuzzy guitars and drawn-out, subtle grooves of the Krautrock and shoegaze sides of the indie rock world, says his motivation shifted and grew in importance as his bands took off. “People would tell us that we inspire them, musically, and in other aspects of their life. That’s huge. It sort of made me think more about what I was doing when I was writing, and how this could be translated to someone else’s writing or art of daily life.”

On Spooky Action, Pundt performed all the parts alone, but the songs were written to be performed live with a full band. His touring drummer usually plays guitar with other groups, and bassist T.J. Blake usually plays drums, adding to the unpredictability. “(Drummer) Frankie (Broyles) had played drums for Lotus Plaza in the first-ever live show along with Dan (Wakefield), the guitarist, so the two of them were up for doing it again. Allen (Taylor), who plays synths in the band, already had a background in playing electronic music and a familiarity with synths and how to use them, so it was perfect.”

Pundt is also inspired by the women in his life. His fiancée, Shayda Yavari, is also his partner in yet another band, Nice Weekend. “She’s the mind behind the operation,” he says. “She tells me how she wants the song to sound or the feeling it should have, and I try to get there.” Pundt finds a sound that she responds to, and she then develops vocal melodies around that sound. “There’s no expectations other than to make something that we like.”

Spooky Action was dedicated to his grandmother, Doris Fields, about whom Pundt says, “She was one of the most amazing people I’ll ever know. I’m biased, of course, but I think everyone who knew her would agree … I always felt at such ease in her company. She was one of those people that always seemed so peaceful inside, and it rubbed off on me when I was around her. It’s hard to find that kind of stillness and contentment.”

LP: Probably Spectrum. I love a lot of Spiritualized songs, but Spectrum is more my thing.

LP: I heard Dots and Loops first, and it was the first of their albums that I really dug in to, but I like the songs on Emperor better. There is so much energy on that album.

LP: Roxy Music, for sure. A few years ago, I’d had said Eno, but Roxy Music only gets better every time I listen to them.

with Natives and Hollow Stars