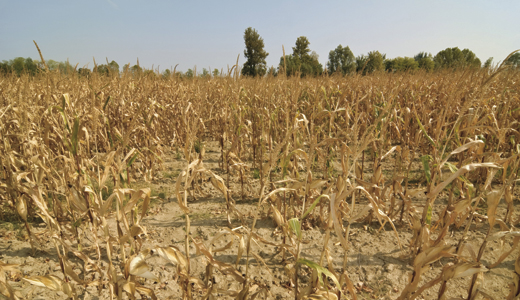 Throw a dart at a map of the United States, and chances are better than 50-50 you’ll hit a county currently struggling with drought.

So far, of those affected counties, about 1,300 have been declared federal disaster areas. This severe dry spell covers a swath of 29 states, the worst of it in the Midwest and High Plains. Kentucky, particularly the western part of the state, has certainly not been spared. Farms in Ballard, Crittenden, Livingston, McCracken and Union counties recently became eligible for Small Business Administration Disaster Loans, and, last week, the University of Kentucky reported that 77 percent of the state’s corn crop received a “poor” or “very poor” rating. Soybeans are only slightly better at 52 percent “poor” to “very poor.”

Still, watching nightly news footage of desiccated lakebeds and russet-colored cornfields around the U.S., one wonders if the average viewer gets how connected we all are to this crisis — regardless of our proximity to it. Reached via email, Stuart Foster, the state climatologist and director of the Kentucky Climate Center, echoes this thought.

“Eighty percent of American residents live in urban areas,” says Foster. “Dining at a local, air-conditioned restaurant during the drought and heat wave of 2007, I recall looking out the window and wondering if the average resident even realized we were in the midst of a drought.”

Foster notes that more attention is typically paid to the agricultural sector during periods of drought because it is the first and hardest hit. This might partially explain the state of blissful ignorance enjoyed by many city dwellers during these periods (which, I confess, I am sometimes a part of). But, awareness of the 2012 drought is bound to be heightened for a number of reasons — for one, its reach is already historic.

Foster explains that the conditions in Western Kentucky this year — below-normal snow and rainfall in winter, an unseasonably warm March, record precipitation deficiencies from April through June, and the oppressive heat this summer — are unlike any that residents of the region have seen in their lifetimes.

A second factor that will bring this drought closer to home for a greater number of people is how entwined the global commodities markets have become. Prices for our grain are already being driven up by worldwide bids. The heat waves and dearth of rain has not only meant less supply, but greater demand as ranchers with wilted pastures seek ways of feeding their herds. (Livestock consume half of the country’s grain.) This, obviously, drives up prices further on products with even remote connections to corn and soybeans.

Cattle in the United States has hit its lowest count in 60 years, causing the average price per pound for beef to hover around its record high of $3.01 per pound. This, by no means, indicates high times for the nation’s ranchers. Reached at his home in Abilene, Texas, Benjamin Lee, a self-proclaimed cowboy, described his struggles with a protracted drought that peaked last summer.

“I was forced to sell half of my herd in a flooded market with reduced prices. Now the market has bounced back tremendously, which is fortunate, but replacing those cows is very expensive,” Lee explains. “It was a sad day (at the auction) because it had taken me years to establish and build a herd. Last year was the year I would have seen a real profit and begin to realize the results of my time and effort.”

As watering holes slowly replenish and edible weeds and grass once again appear around Lee’s land, the rancher and horse trainer can’t help but feel for what farmers in the Midwest are going through. He is also fearful. As Texas begins to pull out of its misery, spikes in feed prices caused by drought elsewhere will ensure that the struggle continues for beef producers in the Southwest and beyond. (Like beef, corn also hit its record high price last week.)

“Any of Mother Nature’s severe conditions can make one feel helpless at times,” says Lee.

This is very much everyone’s drought. No one can say how long it will last or how bad it will get, but we’ll all soon experience its effects in some way — if we haven’t already. Stuart Foster predicts that people in countries throughout the world will feel the drought’s impact. Benjamin Lee, whose cattle are beginning to bounce back, but may take years to return to a regular calving schedule, said something very similar about the weather this summer.

“It will affect all of us for the rest of our lives.”