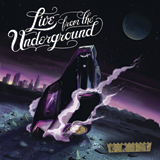 After three mixtapes better than most emcees’ entire catalogs, K.R.I.T. ventures into the retail market. K.R.I.T. is his own producer and had to re-evaluate his common practice of using well-known samples. Fear not, as Underground is a picture-perfect example of transitioning from the “anything goes” mixtape world to the confines of the major label world of features and sample-free production. K.R.I.T. is an acolyte of the ’90s Southern rap scene, a pre-No Limit and Cash Money world when the idea of “balance” ran hip-hop. It is possible to try to change the world Monday through Friday and then want to see somebody’s daughter shake it on the weekend. K.R.I.T. rides that line like a pro, with thoughtful pieces like “Porchlight,” “Rich Dad, Poor Dad” and “Praying Man,” and waxes carnal on “Money on the Floor.” Essential.