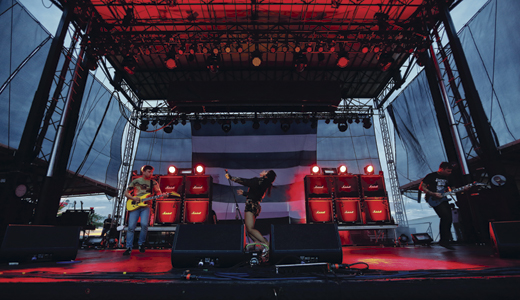 Rachel Grimes, the contemporary classical pianist and Louisvillian, took a moment during her sunny mid-Sunday afternoon slot at the Forecastle Festival to greet the out-of-towners who had traveled here for the 10th annual fest.

Though numerous local musicians, friends and family were also in attendance, cheering her on as she undertook the unenviable task of performing subtle yet complex compositions to half-naked young drinkers, Grimes relayed her experiences writing and recording near Bardstown, where Thomas Merton’s abbey coexists near the Maker’s Mark and Heaven Hill distilleries. Her description of throwing back bourbon on the porch with the earthy, good-hearted Sisters of Loretto sure made me want to move here — and I’ve lived here for many years.

It was a bit of a surprise that My Morning Jacket’s headlining set Saturday night lacked similar “welcome to Louisville” banter. But it’s not as though they haven’t done so, so much for Louisville (and this festival surely boasted more local bands than most fests drawing upwards of 30,000 attendees); possibly, the band was just exhausted from a long week of prepping, playing, hosting and running around. (Jacket leader Jim James was a serial drop-in guest of others’ sets during the fest, perhaps only bested by cellist Ben Sollee.)

This was the first full-on Forecastle Festival (last year there was only a mini-fest) overseen by AC Entertainment, the promotions company that also runs the Bonnaroo, Moogfest and Big Ears festivals. Without taking anything away from founder J.K. McKnight and his army of volunteers who built Forecastle from the ground up, many noted how efficient and well-oiled the machine was this year. Aside from some Porta-Potty lighting issues, and the usual “too expensive” beer complaints typical of every festival, Waterfront Park was transformed into an easy-to-navigate playground of bands, booze, food, art, and sartorial choices ranging from “She looks great, but she must be sweltering in that” to “Who told the reincarnation of John Candy he could wear a backpack but no shirt?”

Though Saturday’s early afternoon attack of pounding rain threatened to overtake the biggest day, it ended quickly and the show went on with only minor delays, rescheduling, mud, and the city curfew extended to 12:30 a.m. That extra half-hour allowed MMJ time to add covers of songs by Elton John, George Harrison, The Band, and, most popularly, Wham!’s “Careless Whisper,” which included band members handing out bananas to a few delirious fans up front.

Though I can’t easily explain why bananas were shared, it was an episode typical of James’ sense of whimsy, which also included bringing old friends the Squallis Puppeteers on stage, and encouraged an atmosphere where Lexington’s March Madness Marching Band could set up under the I-64 overpass and thrill a crowd with their spontaneous-feeling outbursts of music and spectacle. There was also a guy (we assume?) dressed as Gumby often seen enjoying the weekend.

The sound from the five stages occasionally bled into each other, as one might expect, but, mostly, it was possible to focus on one band at a time, if one desired. Though My Morning Jacket exudes more funk than jam band these days, visitors and regular festival-goers might have been surprised by the lack of Widespread Phish Incident-type bands. Instead, audiences grooved to New Orleans’ Galactic and the Preservation Hall Jazz Band, the eccentric soul of Charles Bradley, and Benin’s Orchestre Poly Rythmo de Cotonou.

Subtlety proved to be a harder sell through such a weekend (we still love you, Andrew Bird), and the big noises from MMJ, Wilco, Bassnectar, Sleigh Bells, Flying Lotus, A-Trak, and, naturally, Girl Talk, went over just fine. Beach House won over skeptics with a lovely set, local favorite Neko Case made many swoon, Lower Dens proved to be one to watch, and the Head and the Heart continued their ascension. Locals from a revitalized Nerves Junior to a realigned Wax Fang showed outliers what we’ve got here — in addition to a plethora of natural-smelling, PBR tallboy-drinking, independent music lovers.

“I’ll smoke after almost anyone, but I’m cautious. I don’t want my lips on somebody else’s shit.”

“All the kids knew that Eazy (E) song. That was heartening.” —Thirty-something fan at DJ Wick-It

“With this and Third Street Live, Louisville has become a mecca for young people.” —Alabama native in town for Forecastle

“Sandwiches are an American pastime.”

“I’m just full-on psychedelically hot. Now here’s a song about whores and their place in the ecosystem.” —Neko Case

“Is it just me or does Ben Sollee sound dangerously close to Rusted Root?”

“Why would somebody put the seat down in a Porta-Potty? Seriously, why?” —Female LEO staffer following a pitch-black Porta-Potty snafu

“These beers are built to spill.”

“This sounds like what they play in The Gap.”

“I think you just got hit by a piece of space junk.” —Woman who watched as a clump of glow-in-the dark necklaces grazed her friend’s head during Wilco

“How often do you get to listen to dubstep under an overpass? Is that what they’re called, overpass? We don’t have those in Ireland.”

“I thought that woman was Jim James!”