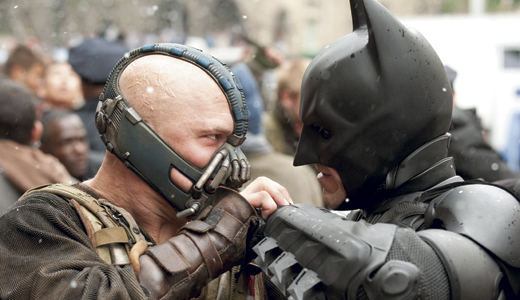 Valedictory from the start, Christopher Nolan’s “The Dark Knight Rises” is somehow both the saddest and the most cartoonish entry in the director’s Batman trilogy — sad in a strange way, and cartoonish in a good way. In “Batman Begins,” the director confounded those anticipating a standard-issue superhero origin story; instead, he gave us an oddly realistic tale of a broken millionaire utilizing his family company’s secret state-of-the-art military prototypes to turn himself into a lone crusader for justice. In “The Dark Knight,” Nolan took what could have been regurgitated tropes and produced a crime epic that was somehow simultaneously Dickensian and internalized — creating a nocturnal world of villains and allies who seemed at times like phantoms conjured by the character’s own mind.

Dickens — specifically in the form of “A Tale of Two Cities,” his novel about the French Revolution — makes a more overt appearance in “Rises.” But this time, Nolan adopts the textures of the comic-book genre in a way he refused to before. We can see it in the magnificent opening setpiece in which the mysterious vigilante Bane (Tom Hardy), a masked, bald muscleman with a chip on his shoulder and a voice I can only describe as “Robot Sean Connery,” takes over a rapidly disintegrating CIA plane in mid-air. The scene has majesty and derring-do, not to mention the kind of exclamatory dialogue that would have seemed out of place in the earlier films. “What happens if I tear off that mask,” someone asks Bane at one point. “That would be very painful,” he replies, adding, “For you!”

Meanwhile, in Gotham, Bruce Wayne — aka Batman, aka Christian Bale — is hounded by a cat burglar named Selina Kyle (aka Catwoman, aka Anne Hathaway) who relishes their noirish back-and-forth. She offers him a post-robbery kiss-off as she crouches in a windowsill, her impossibly long legs gathered under her, before seductively slinking off backwards into the night.

There’s a tonal balancing act going on here that Nolan has never really tried before. Even as “Rises” finally embraces the superhero genre, the character of Batman/Bruce Wayne has never been as vulnerable. Our hero walks with a cane when we first see him, his body broken from too many years of crashing into walls and leaping on cars. Quietly moping beneath Wagnerian underground waterfalls, he has become one of Nolan’s compulsive melancholics.

Throughout, there are hints that the only thing this wounded Bruce/Batman has left to give is his life. There’s even a potential replacement in an idealistic young cop named John Blake (Joseph Gordon-Levitt), who has the same sense of justice Bruce did as a younger man. All these hints and premonitions create a valid sense of urgency. It’s the rare superhero story where you actively fear for the superhero’s life.

“Rises” takes these pop archetypes and keeps building, as Nolan plays these ostensibly basic characters off one another with delirious, almost godlike fervor. Bruce might seem like your typical romantically reluctant hero, but you start to sense a real death wish in his eyes. As for Bane, he may be a cartoon villain, but Nolan and Hardy make him a haunting, perversely heroic one by the time it’s over.

That care doesn’t extend to the plot, however, which doesn’t quite make sense. Before getting down to business — nuclear destruction — Bane wants Gotham to suffer, so he blows up half the city and unleashes a right-wing nightmare of the poor, dragging rich people out of their beds and setting up hasty, unfair tribunals, a la the French Revolution. The more problematic aspect of this section is that raising the stakes so much also brings in additional, annoying plot complications. Somehow, shots of the president and the U.S. Air Force trying to deal with the takeover of a major American city seem dully literal in this context — a buzzkill in the otherwise hermetically sealed atmosphere of a Christopher Nolan film.

We see glimpses of awful things happening without really knowing who’s responsible. Nolan doesn’t want to condemn the people of Gotham too much, and as a result, the film doesn’t really work as a portrait of social decay. (Then again, neither did “A Tale of Two Cities.”) The director seems less interested in presenting a potential American dystopia than in creating a kind of mannered, hysterical melodrama.

The messiness of these later parts, plus scenes of rival armies facing off in combat amid the smoking ruins of a once-great metropolis, somewhat recalls Martin Scorsese’s “Gangs of New York,” which also showed the strain of its ever-expanding canvas. That film, too, was a gloriously expansive cartoon, an attempt to use simple characters and situations to forge a big, bold vision of a nation being born.

But that nation wasn’t a real country; “Gangs” was a retroactive creation myth for the “America” of Sergio Leone Westerns and Bob Kane comic books. In that sense, Nolan’s sprawling bleak fantasy isn’t just a final curtain, but also a kind of homecoming. Ambitious, riveting and silly in equal measure, “The Dark Knight Rises” is a resolutely “shallow” epic — problematic, perhaps, but also a work of unforgettable, compulsive beauty.