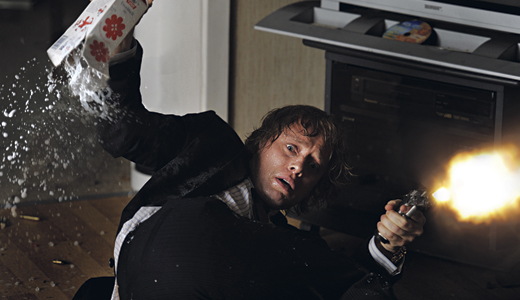 Are you down with Scandi-crime yet? Probably yes, if you’ve enjoyed any of Sweden’s “Dragon Tattoo” books and film adaptations, or TV shows like AMC’s “The Killing,” based on the Danish hit “Forbrydelsen.” Fitting neatly into this emerging genre — also known as Scandinavian Noir — is a new thriller out of Norway called “Headhunters.”

The “Headhunters” set-up resembles your basic heist movie, with a competent enough, albeit stock opening. The establishing moments run like a less cool, less glossy “Ocean’s 11” or “The Italian Job,” but early concern that you may have seen this one before is assuaged by the film’s compelling lead, Aksel Hennie (“A Somewhat Gentle Man,” 2010). Hennie plays Roger Brown, a corporate headhunter who also burgles rare artworks in order to keep model-quality wife (Synnøve Macody Lund) in fine jewellery and a stunning, post-modern mansion.

What makes Roger so watchable is his pint-sized stature — the source of his perceived inadequacy — and his overarching need to compensate for it. The cards often seem stacked against Roger, creating a he’s-never-going-to-pull-it-off quality that proves useful when he embarks on one last score: the theft of a lost Rubens’ painting that vanished during the Holocaust.

It’s here that “Headhunters” comes into its own, pitting Roger against, possibly, the last person in the world you’d want to steal from. Clas Greve (Nikolaj Coster-Waldau from HBO’s “Game of Thrones”) is a GPS expert and former military tracker whose past job description included locating terrorist cells and killing them.

The performances and action sequences that follow are appealing, for sure, but it’s the screenwriting that really sells “Headhunters.” After the somewhat been there opening, the plot quickly tightens like a drum, becoming less predictable with each flip of the script. As Roger and Clas embark on a protracted game of cat-and-mouse, it becomes less clear who’s predator, who’s prey and who else may be conspiring against Roger. It seems at times like the writers have purposely telegraphed false plot twists: You think you see something coming a mile away, and then that thing doesn’t happen. Instead, you’re left feeling sideswiped by often shocking, unexpected reversals.

These twists include surprisingly tender emotional and psychological reveals that go a long way in densifying the film’s characters. As Roger overcomes various obstacles, we learn along with him that his 5-foot-7 frame is not what has created the complications in his life. It’s his own fixation with being short that has led him to the charade of stealing art to retain the interest of his statuesque wife, Diana.

Lars Gudmestad and Ulf Ryberg (“The Girl Who Kicked the Hornet’s Nest”) share in the screenplay credit, which is based on “Hodejegerne,” a novel by Norwegian crime writer Jo Nesbo. Nesbo’s international success is approaching Stieg Larsson proportion, so it comes as little surprise that this adaptation was greeted with the second-largest opening weekend in Norwegian box office history.