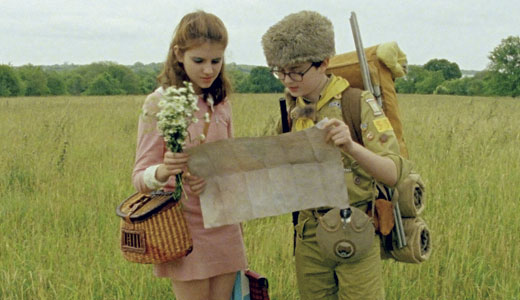 To spend a day inside Wes Anderson’s head must be similar to cracking open your favorite fairy tale/adventure book on a rainy day … when you were 13. It was so easy to get lost in the intricacies of “The Secret Garden” or swept away into Narnia. Anderson’s “Moonrise Kingdom” is a lot like one of those young-adult fantasy books — it asks you to suspend judgment, let go of conventions and believe in love.

Of course this is Anderson’s world, though, and a lot of the quirks he is known for are present here. The cast’s deadpan delivery style makes the relationship between 12-year-olds Sam and Suzy complicated yet simple and sweet. And when you throw in Bill Murray and Francis McDormand as Suzy’s bickering parents, Bruce Willis as the soft town cop, and Edward Norton as a militant Scout leader, the personality-driven storyline gets all the more entertaining and compelling to watch.

Sam (Jared Gilman) quits his Scout troop because he doesn’t feel like he fits in. As an orphan moving from foster home to foster home, Sam is used to fending for himself. In a chance meeting with Suzy (Kara Hayward) in a dressing room at a church play, the two hit it off and begin exchanging letters. Sam writes about his plan to escape his world, and Suzy begs to come along — to leave behind her unhappy home life as well. The two pack their most cherished belongings — Sam: all the necessary equipment to survive the wilderness; Suzy: a suitcase of her favorite books, her cat and a record player — and the two disappear into the forests of their New England town.

With a storm brewing in the distance, the town — namely Suzy’s parents, the cop and the Scout leader and his troops — organizes a search party to find the runaways. While on the lam, Sam and Suzy grow increasingly closer and make a pact to always be there for one another. After Sam tells Suzy about the hardships of growing up an orphan, Suzy admits that she thinks it would be better to grow up without parents — it would make you more special. “I love you, but you have no idea what you are talking about,” Sam tells her nonchalantly.

Maybe not as expansive as “Rushmore” or as comical as “The Royal Tenenbaums,” “Moonrise Kingdom” serves up adventure, escape and humor in the form of innocence. It’s two hours in Wes Anderson’s world you won’t likely forget.