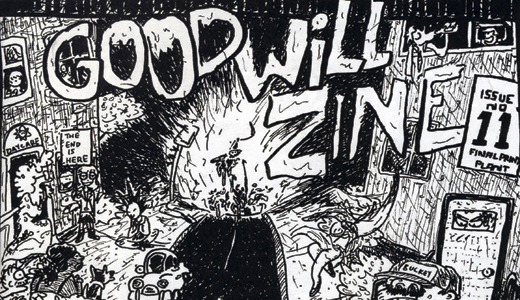 June Leffler created and ran the youth-based arts and culture Goodwill Zine (GWZ) for 11 issues. Now, after a final “end of the world” issue, the end has arrived. Leffler told LEO about her experience becoming part of Louisville’s do-it-yourself underground culture.

LEO: How did you discover zines?
June Leffler: When I was 13, I found my mother’s zine she did in the late ’80s. It was called “WAMBAF” (Women Against Men, Boys Are Fuckers) and was really just a means for my mom and her girlfriends to talk about dumb stuff like the high school scene and boys they were into. It was a productive and creative means of just bitching about themselves.

When I stumbled across this, I immediately knew I wanted to make one. I knew I could do the same … Even though I love art, and learning even more so, I didn’t really create or interact with (creative) people too much until I learned of zines. Without finding zines, I’d probably be a pretty plain person.

LEO: Why did Louisville need Goodwill?
JL: GWZ was founded, really, in an effort to put out a consistent and somewhat mass-distributed zine. We don’t have a zine culture, even though we’re pretty hip and artsy for our size. Zines are a vital part of DIY culture. People are, of course, out there doing it on their own … I wanted to produce a zine that people could pick up, because it was probably the first zine a lot of Louisville people saw. And I know it was because I constantly have to tell educated or cultured people what a zine is, how it’s pronounced.

I wanted Louisville to have a super-grassroots yet consistently published zine, as Louisville actually has had in the past. Thankfully, other small publications and zines are popping up. I wanted to talk about aspects of the youth and arts community that I thought were cool. Louisville’s great at maintaining high-school cliques, myself included. I wanted to talk about my friends and people I had just met, because no one else was talking about them.

LEO: Why zines instead of an online blog?
JL: I really wouldn’t ever think to blog. The only blogs I read are like recipe blogs, and in that case, I can go to any used bookstore and get a cheap cookbook and enjoy it a little bit more.

I can barely acknowledge print going out because I personally read books and zines. Maybe print is becoming a gourmet operation, for the poetry buffs and letterpress artists. If so, I think the zine community is just as strong, because zines represent all that’s necessary in DIY publishing. It’s the same reason tapes and vinyl are hip, right?

LEO: How did you feel about being in charge?
JL: I had been in college and helped out with other publications. The zine was something I started independently and funded independently, until we received our KFW (Kentucky Foundation for Women) grant. Being a college student, not having to worry about making a profit off of this project, I was able to do something completely innovative. I was only responsible to myself and my own terms.

Having done the zine, I realize how important it is to do independent and innovative projects when you’re young. We’re at a pivotal age where we’re going to lose all of our dissatisfied punk gusto — that I myself had as a teen — hoping for an open spot in the professional or academic world.

LEO: How did Alex Major help you keep it going?
JL: We met during the second issue, and, since then, he’s done the layout for the zine. I haven’t met anyone I share such artistic ethos with. He’s a collage and indie comic artist aiming for low-fi prolificness. That prolificness over perfectionism is what made people aware of us. The project was really ours. Some people would end up taking over issues with all their writing, but Alex and I were the only two constants throughout the three years.

LEO: Future plans?
JL: I hope to teach abroad, set up a Louisville zine library, and host a second “make a zine in a month” challenge in September.