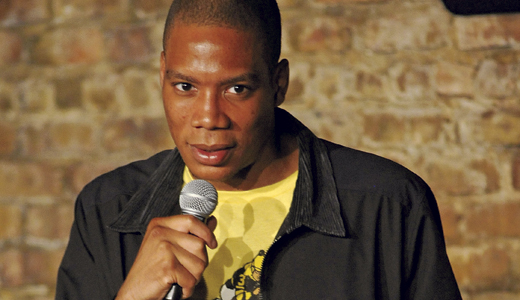 Reese Waters, a veteran of “David Letterman” and “Craig Ferguson,” was raised in Maryland, just outside of D.C. “I’ve heard politics described as show business for ugly people,” he says. “And if you’ve ever walked around Capitol Hill and seen the splotchy skin that’s visible on every corner, you’d agree with that.”

While attending Columbia University, Reese tried his first open-mic and has been performing since. He’s currently co-host of “The Daily Line” on the Versus network, and he’ll be at The Improv this weekend.

LEO: We’re really excited about the show.
Reese Waters: I’ve never been to Louisville before. But everybody I’ve met from there really talks about it — it boarders on New York City as the city that its residents can’t seem to stop talking about. So I just wanna see what all the hype is about.

LEO: Did you end up with the girl?
RW: I, unfortunately, did not end up with the girl. I put in all four years of work, trying to make that happen. The closest I came was my junior year. We were both really drunk and she said, “Why don’t you crash at my place?” Which I thought was an invitation for relations, but it was really just her way of saying: “You’re way too drunk to walk to the other side of campus.” It was a simple misunderstanding.

LEO: Your material doesn’t seem as cynical as most comics from New York.
RW: When I started out, everyone I started with were big Dave Atell-clones or Jim Norton-clones, who were the big guys at that time. I tried to imitate that, because that’s what everybody was doing. But after graduation, I moved to San Francisco; again, a girl — she lived there and I was in love. When I got there, though, I promptly fell out of love with her and in love with the city. And that’s where my style was really born. They’re very laid back and experimental there. It was a fertile place to grow and act.

LEO: You moved for a girl … I made that mistake once myself.
RW: When you’re a young guy, you’re very impulsive. You have little life experience to tell you, “You know, there’s another train coming.” Because I don’t think there’s another train coming, I didn’t get laid a lot in high school … or at all… we’ll just go with one of those two. When I was in college or shortly thereafter, when I got excited about someone and, shockingly, she’s not disgusted by me … I kinda need to chase that to the end of the earth.

LEO: Do we ever, really, grow out of who we were in high school?
RW: That’s a very good point. I have never seen it happen. It’s unfortunate, because none of us comics were winners in high school. No one doing comedy was ballin’ in high school, it’s just not how this works. If we could outgrow that need for validation, that need to be loved, and that need to have sex on a daily basis, we would probably be better citizens of the world. But, unfortunately, we have to satisfy that hole.

LEO: How did you manage to infuse your love of sports with comedy?
RW: A few years ago, my girlfriend told me to write 10 jokes about sports.