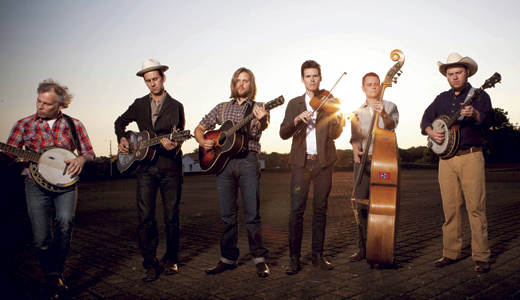 In the autumn of 1998, Ketch Secor and some like-minded musicians were roughly 20 years old and seeking, as Secor puts it, “that Woody Guthrie kind of wandering experience,” busking and walking into joints in search of gigs. Along the way, the resulting collective, Old Crow Medicine Show, fashioned its own brand of string-band music, secured a recording contract, and found a big ally in the late Doc Watson. LEO recently caught up with Secor via telephone during a pause in the band’s tour, which lands them back in town on Thursday.

LEO: For a relatively young band, there is a lot of mythology that surrounds you guys.

Ketch Secor: One thing your readers should know about us is that we have a tendency to not tell the truth (laughs).

LEO: You mentioned previously that, at a young age, you were equally entranced by ancient fiddle tunes and Bob Dylan’s turn of phrase. But you also had a special relationship with Doc Watson. Since we recently lost him, could you speak to Watson’s impact on the band?

KS: I’ve been thinking a lot about Doc Watson lately and have been putting out my prayers for his family, who graciously shared him with us all those years. We were really fortunate to have spent some time with him as a band, and, of course, we are indebted to him for giving us our first big break. In terms of style, the man definitely had the sort of swagger we’ve tried to capture. And most people don’t know that Doc played hillbilly rock ’n’ roll on the street corners of Boone, N.C., long before he ever thought, “Oh, I’ll play the old-time music of my daddy for all the world to hear.” We still like to think that the Old Crow are primarily a rock band, or at least as informed by rock ’n’ roll as anything else.

LEO: You are currently out on the road in support of Carry Me Back, a remarkable new album produced by Ted Hutt. While there is no shortage of interesting material, the most moving track on the record has to be “Levi.” What is the story behind that one?

KS: That’s a song that came to me from a radio program about a boy who was recently killed by a suicide bomber in the city of Baghdad. It was a great NPR piece in which they talked through the life of this one U.S. G.I. I recognized right away that the fella they were talking about would’ve been my kind of man. The kind of guy you would have seen at our shows dancing down by the stage with a ball cap on his head, a pretty girl on his arm, and a Bud Light in his hand. At the conclusion of the piece, they said that at the funeral, Levi Barnard’s family played a song by his favorite band, and it turned out to be (our) “Wagon Wheel.”

LEO: During the first night of the tour, in Owensboro, there was some grumbling in the audience before you took the stage about lineup changes. What do you say to folks who insist that this isn’t the same band?

KS: There is a big lineup change. Anyone grumbling about that is entitled to their opinion. But they aren’t incorrect. I mean, we started out as a 12-piece or something, if you count all the guys selling knickknacks and the girl that painted your caricature. At one time, we actually had three banjo players. I don’t really have anything to say about it. When you are a band at the 14-year mark, I guess you’ve earned the right to be a bit tight-lipped about the choices you make. But we are really happy with our current lineup. Most of all, I’m just thrilled to have my dear friend and partner Critter Fuqua back and doing so well.