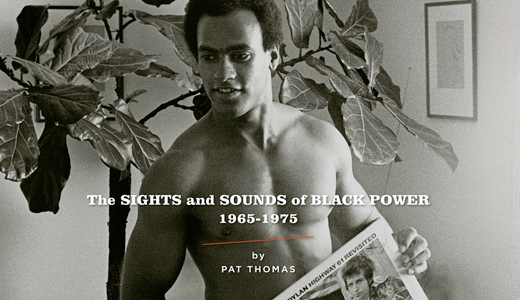 “Listen, Whitey!” attempts to chronicle the musical history of the Black Power movement, focusing on the decade after Malcolm X’s assassination. What could have been a simple “show me” style coffee-table book turns into a solid, if basic, history of the movement. Sure, Huey Newton is pictured on the cover, but, interestingly, he’s holding a copy of Bob Dylan’s Highway 61 Revisited, and the story is about Newton’s interpretation of Dylan’s “Ballad of a Thin Man,” in which he sees Mister Jones and the geeks in a very different light.

The stories here are often from first-hand conversations that author Pat Thomas conducted in his decade living in Oakland. Walking histories like singer/songwriter Eugene McDaniels and Panthers Elaine Brown and David Hilliard became friends along the way, sharing insights that reach far beyond the heroic statues most books have sculpted over the years, and showing the personalities of the boldface names. It’s easy to forget how young the Panthers were at the height of their activity. When I think of my 21st year, compared to Stokely and Huey’s, I shudder in embarrassment.

The author did have a bit of an inside track through a unique avenue: Thomas was a reissue producer for the Water and Four Men With Beards labels, and worked on CD releases of Elaine Brown’s Seize the Time and Eugene McDaniels’ Nixon-angering early ’70s Atlantic albums. (The label dropped him as an artist after getting phone calls from the White House, though he stayed on as a songwriter for Roberta Flack, Les McCann and others.) He is currently occupying a similar position for Light in the Attic, which released an audio companion to the book.

At times, the book caters to the show-and-tell fanboyism of the record collector, showing off scans of impossibly rare 45s that would command hundreds if you were lucky enough to encounter a copy. But that just adds to the enjoyment. Thomas uses several pages as a bully pulpit, haranguing Motown for their modern-day neglect of their Black Forum label, whose albums chronicled speeches by Martin, Ossie Davis and Bill Cosby, and poetry and music from Amiri Baraka, Langston Hughes and Brown. The label’s eight albums could easily be collected into a Hip-O Select box set. Certainly, more ink could have been used detailing Stax Records’ music of the period. Surely Al Bell deserves a mention or three. And Nina Simone is given a few scant paragraphs.

“Listen, Whitey!” is not written from an academic perspective, as so much history tends to be, and is highly readable and conversational. Thomas occasionally opines a bit strongly and loosely for this reader, but it happens so infrequently as to be a minor quibble (and any digs at Stanley Crouch are always appreciated). This is a welcome addition to both political and cultural studies of the era, and a love letter for record collectors. If you’re anything like me, you will have started your “need it/got it” checklist shortly after completing the preface.