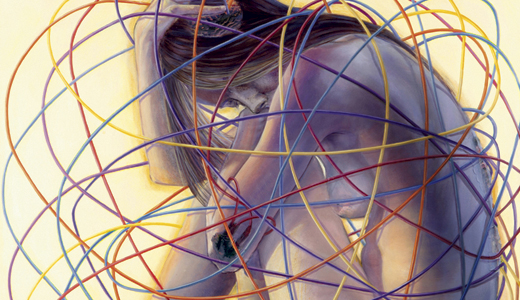 Debra Lott is an educator at heart. Due to her work in the profession, most recently as head of the Assumption High School fine art department, her large-scale oil paintings are understandable, didactic and frank. Nearly two years since her last show at Pyro Gallery, Lott is using her paintings as the anchor for the group show she has organized about the fragility and folly of human existence. Opening Thursday, “The Human Condition” will feature 23 regional artists who will be exhibited alongside Lott in Pyro’s considerable gallery space.

“I’ve done solo shows in the past but wanted to show my work with other artists this time around,” Lott says. “I’m a full-time educator, and my paintings are often time consuming to complete, so I would rather show fewer paintings than spend all my time churning out paintings to fill up the space.”

Lott’s identity as an educator comes through both in her technical proficiency and emphasis on themes of social justice. Each of her oil paintings is an illustration of the foibles and failures of technology and humanity in the 21st century. In “Lifelines,” Lott’s painting plugs computer cables of various colors into a vulnerable nude female figure, exposing computer hardware panels in her skin. In “Nana and Heidi,” she depicts a grandmother and granddaughter under a large polka-dotted sun umbrella. The two figures, who engage the viewer’s gaze with their own, give off a kind of uneasy resignation. Above a baby-blue sundress, the young woman’s perma catheter, used for dialysis treatments, is as obvious as the grandmother’s medical alert bracelet, cluing the viewer into the elder subject’s advanced Alzheimer’s disease. Absent from the painting is its real subject — the hundreds of thousands of baby boomers who are sandwiched in the position of taking care of their elderly parents and, increasingly, their dependant adult children.

Among the other contemporary challenges Lott explores in “The Human Condition” are the issues of environmental degradation and the disastrous consequences of compassion fatigue. In “Drowning in Denial,” Lott tackles the Great Pacific Garbage Patch, which she develops further in her painting “The State if Apathy Produces Monsters.” The latter features the effects of this environmental phenomenon on marine wildlife and takes its title from Spanish painter Francisco de Goya’s famously titled “The Sleep of Reason Produces Monsters.” The thematic use of cool blue tones belies Lott’s rational, mostly realist approach to her subjects. She is an educator, she is explicit, her viewpoint is streamlined and focused.

Among the regional artists showing alongside Lott are Michael T. O’Bannon and Benjamin Cook. O’Bannon’s large-scale painting, “History of the World,” depicts in its repeating imagery the artist’s memory of the revelations of torture and mistreatment of the Abu Ghraib detainees. He expresses what he feels the experience taught him about the innate brutality of humans. Cook’s two large-scale paintings, like Lott’s “Lifelines,” take photorealistic figurative portraits and hybridize humans with technological components.