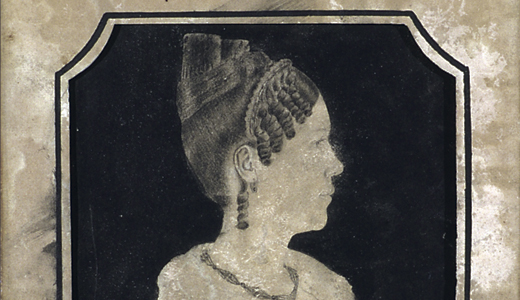 In the buzzing pre-Derby season of 1989, Florence and Hunter Hooe showed up on the doorstep of the Portland Museum with photographs of some heirloom portraits. Residents of Athens, Ohio, the visitors had paid a visit to the Filson Historical Society, where they discovered they were descendents of Squire Earick, one of the founders and most prominent citizens of old Portland.

When executive director Nathalie Andrews examined the photos, she had a hunch that the two oil paintings and two chalk-and-charcoal drawings were more than just pretty pictures. She requested to examine the originals in person. A few weeks later, Florence and Hunter pulled their minivan into the museum parking lot after deciding to donate the portraits to the museum.

After several years of careful study, Andrews and her colleagues have concluded the portraits were drawn by John James Audubon. “If you knew where we started,” says Andrews, “which was in a classroom with nothing … when someone walks in and hands you an Audubon, you think, ‘Wow, now we’re really a museum.’”

These portraits, which depict members of the Earick and Berthoud families, originally sold for $25 (which would be about $450 today). They are the earliest of the 30 pieces in the exhibit. Not only does this show seek to cover 200 years of artwork in Portland, but it also documents the historical changes and social shifts that have affected the town since then.

The steamboat era, for example, is represented in the work of Xantippe “Tip” Saunders, a talented portrait painter and cousin of Mark Twain. Her contribution to the exhibit is an enormous oil painting of three anonymous blonde children and their pet lamb. The painting, hanging in its ornate, gold frame above the iron fireplace in the Albert B. Comstock gallery, isn’t owned by the museum, but it’s not a stretch of the imagination to envision that it has always been where it now sits.

The exhibit also features informative panels on stars of the silver screen who were born or grew up in Portland. Featured are Tod Browning, the director of “Dracula” (1931) and “Freaks” (1932); D.W. Griffith, director of “Birth of a Nation” (1915) and “Intolerance” (1916); and Irene Dunne, star of “Cimarron” (1931) and “I Remember Mama” (1948). The museum had planned on screening the films but couldn’t secure the rights.

By the turn of the 20th century, Portland had already existed as a separate community for almost a century. Walter Kiser, an avid preservationist and columnist for the Louisville Times, wrote and drew a weekly feature called “Neighborhood Sketches” in which he highlighted historic homes. Three of Kiser’s original ink drawings are featured, detailing two now-demolished homesteads and Beech Grove, the 1852 house in which the Portland Museum now resides.

“Hidden Treasure: 200 Years of Art in Portland” is truly one of the most comprehensive and well-curated neighborhood-specific exhibits Louisville has had, most likely due to the large, artistic base located in and around Portland.