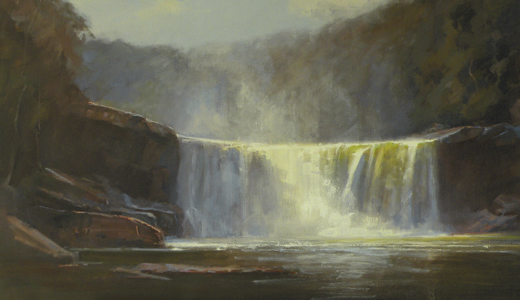 Every fiber of your being is screaming you need a vacation, preferably to a faraway land. Unfortunately, the coffer is empty; looks like it’s going to be a staycation again this year. Yet there is a middle ground, one that lets you visit scenic Kentucky without having to gas up the car — or perhaps inspiring you to do just that.

Bill Fletcher loves this state, and it shows. His exhibition “For Love of Kentucky” features recent paintings that range from specific Kentucky sites to almost-anywhere countryside. No matter what painting you view, you can relax as if you were on a vacation. Think of it as a visual “time out.”

“Creativity is, at its heart, not about ego but about connection,” Fletcher says. “The paintings in this exhibit are an expression of my connection to the land of Kentucky. It is my hope that they might inspire a feeling of connection in those viewing this show.”

Fletcher began his career as a toxicologist. The artistic side of the scientist would not be silenced, so he began oil painting in earnest in 1996. He soon developed a passion for landscapes, occasionally painting the same scene as a series.

“Cumberland Falls” is a series of three that gets progressively larger as the numbers get higher. In viewing the huge “Cumberland Falls III,” it becomes clear why the Falls, at 68 feet high and 125 feet wide, is nicknamed “the Niagara of the South.” It practically has a soundtrack of rapidly churning water. Fletcher is in total command when duplicating the scene from canvas to canvas, with only a slight difference in cloud patterns.

And speaking of clouds, he’s quite the master of those as well. Gone are the expected fluffy white cotton balls, to be replaced with seemingly lit-from-within streaks of gold and orange. This technique can be seen in “Summertime on the Ohio III,” with its single large cloud over a ribbon of river.

Another series is “Auxier Ridge I and II.” The autumn trees and bushes in red, green and gold are shown clinging against the bare rock of the mountainside. Beige geometric rectangles and squares form the side of the ridge.

His colorful style is usually a tight realism with slight impressionistic touches, although every now and then his brushstrokes become obviously looser, as in “Shaker’s Gold.” The small painting is composed of bays of hay dotting the thickly painted golden field in the foreground.

Another hay scene, “Highland Hay,” features cows eating around a central grove of green trees. Again, the hay is a lush field of gold.

The horizontal work “Moonrise at Anderson’s View” shows how effective a limited palette can be. The colors of the sky mimic the trees of rust and orange, a scene reminiscent of traveling through the Kentucky countryside in autumn.