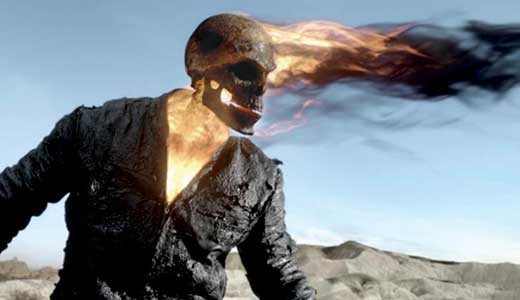 We thought the first “Ghost Rider” movie suffered from too much Nic Cage (ugh), but watching this new one at the theaters devolved into an argument over whether it was made by 9-year-olds or for 9-year-olds. (The answer is “both.”) That’s not to say we didn’t enjoy ourselves: This is one action-packed mofo with some truly demented special effects, particularly the flesh-to-fire transformations. But it was so stupid and over-the-top that we almost began to feel sorry for No Talent Nicky. Big Dumb Fun, and recommended, if for no other reason than watching him burst into flame.

SHERLOCK HOLMES: A GAME OF SHADOWS

While not the groundbreaking action/comedy/drama of 2009’s original with Robert Downey Jr. and Jude Law, this one has the same breathless pace and nicely insane Edwardian set pieces. The rest of the cast happily returns (some of them all too briefly), while Noomi Rapace comes aboard as a Gypsy queen, central to the impossible plot, and Jared Harris comes into the light as an evilly smarmy Moriarity. A damn fun adventure, even though we rarely knew what was going on. Our highest recommendation.

A LITTLE BIT OF HEAVEN

This silly chick flick has one of the best casts imaginable. Kate Hudson shines as the upbeat, offbeat free spirit who hates her parents (Kathy Bates and Treat Williams) and finds herself attracted to her doctor (Gael García Bernal). Funny as hell in spots, even after she learns she has a terminal disease (like we said, “chick flick”), with Whoopi Goldberg as God (really) and Peter Dinklage as the titular little bit (again: not makin’ this up). Will get you laid.

Cult film maven Jesus “Jesse” Franco has made almost 200 films under nearly as many pseudonyms in his long career, and this is one of our personal faves. Howard Vernon and stunning Alice Arno are aristocratic cannibals who lure people to their private island for a fine meal, then hunt them down (naked, of course), kill them, and serve their meat to the next unsuspecting victim. What kind of mind could think up such a thing? The same that had the smarts to cast gorgeous Kali Hansa as the “virginal” prey! Yow! Now available in a restored director’s cut.

Notable largely for being the late Corey Haim’s last flick. He plays a corrupt LAPD cop on the trail of some bad buds who rob a bank, only to discover that the money belongs to a gangster who now wants them seriously dead. Watch this, then pull out your copy of “The Lost Boys” (you know you have one).

Not to be confused with Ivan Reitman’s 1997 Robin Williams comedy, this is Troma’s “Father’s Day,” and that means entertainment. Made for a reported $10K, it’s a surprisingly professional, damn funny and completely over the top crap/gore-fest about three disturbed men on the trail of a violent psychopath known as “Chris Fuchman, The Father’s Day Killer.” Troma founder Lloyd Kaufman plays both God and the Devil. Tasteless and surreal; our highest recommendation.

“GCB” stands for “Good Christian Bitches,” but ABC-TV — owned by Disney — is too lame to put that on the screen. The creator of “Sex in the City” sets this talky wannabe sleaze-fest in a women’s church clique, to make it “Christian.” Kristin Chenoweth is “Carlene Cockburn.” That joke is about as deep as this gets, folks. Leslie Bibb plays the former nemesis/bad girl of a high school clique, now returned home in disgrace to face their reprisals with support from mom Annie Potts. The show has reportedly been canceled.

Hal Ashby’s groundbreaking romantic/social commentary comedy-drama-whatever defies categorization but remains as entertaining as ever, now in a Blu-ray Criterion Edition. Bud Cort is a dark, morbid teen whose only joys in life are funerals and making his rich mother miserable. Ruth Gordon is the 70-something free spirit who helps him find the light, breaking down all the walls of society (including the one about teens not screwing old ladies). With a perfect soundtrack by Cat Stevens, this is a cult fable that just keeps getting better with age; a must-own.

This powerful Polish drama takes “Schindler’s List” and turns it on its ear, telling the true tale of Leopold Socha, a degenerate, criminal sewer worker who — for a price — hides Jews from the Nazis down amid the filth. To him it is simply business: The Nazis will pay $500 per Jew; if the Jews offer more, they get a chance to live … unless he decides to turn them in later. But the bloodshed and cruelty on the surface finally weighs on his conscience.

This profound, funny and surprisingly deep French fable stars Garance Le Guillermic as a bored 11-year-old who has decided to commit suicide on her 12th birthday. A real picker-upper, huh? Trust us, in the course of 100 minutes, you will be mesmerized by her journey, assisted by a grumpy janitor and a mysterious old woman who help her find the love that lies hidden all around us. Truly wonderful.

Greg Kinnear continues his relentless pursuit of acting perfection in this crime-caper tale with Alan Arkin, Lea Thompson, Bob Balaban and Billy Crudup. He’s an insurance agent looking for a way out of Kenosha, Wis., who starts a complex con that only leads him deeper and deeper into trouble. Sound like “Fargo”? Well, the original script didn’t, but the studio re-cut the whole thing without the director’s permission. What’s left is a flawed, if entertaining, kinda black comedy/drama. We liked it.