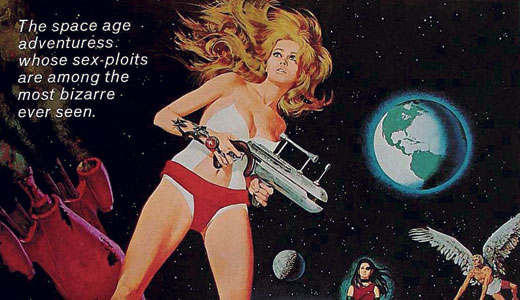 Is this Jane Fonda’s most embarrassing moment or her greatest triumph? Depends on your position in space and time. In 1968, she was married to French filmster Roger Vadim — famous for launching Brigitte Bardot’s career with the highly recommended “… And God Created Woman” — and at this time she was willing to do anything to please her hubby. Don’t believe us? Check out her slo-mo, zero-gravity striptease in the opening credits! A hilarious sci-fi romp through the year 40,000 A.D., based on a comic strip, complete with razor-toothed playthings, a wicked queen, sex pills and lots of peek-a-boo black leather. Truly awful; our highest rating. Now on Blu-ray.

A trio of howlers from the over-endowed empress of drive-in porn (two of which we saw first-run at the late, lamented Preston Drive-In — a Lowe’s now squats in its place). First, her breakthrough film, “Deadly Weapons,” in which she takes on the mob with her massive 73-inch mammaries. Next up is her masterpiece, “Double Agent 73”: the do-or-die infiltration of an evil drug ring that she photographs with a camera/time bomb implanted in one of her boobs! The final title is Doris Wishman’s “The Immoral Three”; while Chesty’s not actually in it, this is essentially a sequel to “DA73” with a trio of comely vixens playing her daughters who meet for the first time at Mom’s funeral. It seems her former spy-masters want to recruit the girls to avenge Mom’s death after Chesty gets blown up by her own boob-bomb while on a case. Truly inspired sleaze.

Your basic “struggle to survive and re-establish mankind in a post-apocalyptic hellscape” no-budgeter like those that filled late-night cable back in the ’80s. A nice bit of action, mayhem and monsters like they just don’t make anymore. Stars no one you ever heard of, but we liked it.

The first full-screen movie written and directed by our mentor, the redoubtable Ed Wood Jr., now colorized for some damn-dumb reason, yet complete with a beautiful b&w print. This heartfelt, uber-camp look at male cross-dressers and the women who share their wardrobe is simply not to be missed. Stars Ed (as “Daniel Davis”), his then-wife Delores Fuller, “Tommy” Haynes in a segue about pseudohermaphrodites, and a truly bizarre narration cameo by Bela Lugosi. Our highest recommendation.

Wow! What a movie! A low-budget action-comedy with Joel Murray playing a terminally ill vet on a mission to blow away the worst of mankind while he still has time. So far so good, but then he picks up an apprentice: little 16-year-old cutie Tara Lynne Barr! From there, the whole thing goes gloriously off the rails for director Bobcat Goldthwait as they start a coast to coast war on TV reality shows. Definitely worth checking out.

A boy-genius, conceived in a Petri dish and raised by his culturally militant single mother (the great Toni Collette), follows a string of Post-It notes that he believes will lead him to his biological father. The best bits involve his conservative Catholic schoolmasters. Fun.

A raunchy pot-comedy aimed at teens? Well, that’s how we saw it as super-cool, weed-dealing hero Snoop Dogg joins Wiz Khalifa, a high-schooler in need of perfect As to get a scholarship, for a big “chemistry” project propelled by slimy math teacher Mike Epps, sleazy strippers, non-stop drug consumption, and 15 musical numbers. If it ever made any sense, we must have missed it.

SOME GUY WHO KILLS PEOPLE

Kevin Corrigan plays a man with a head injury, working a dead-end job, who spends his off time reading comics, trying to forget the beatings and torture that left him scarred at the hands of a gang of high school punks. Is it any wonder he fantasizes about killing people? If this all sounds familiar, forget what you’re thinking! The nicely controlled action and measured pace keeps this from being just another stupid, bloody revenge-flick. With Barry Bostwick and Karen Black; very nicely done.

A surprisingly deep little indie drama set during the era of the NASA moonwalks in a typically bland cookie-cutter suburban neighborhood. A gaggle of housewives start a friendly recipe-swapping club that leads to ever more competitive dinner parties. Then harmless neighbor flirtation turns aggressive as drink flows, secrets spill and more than recipes get swapped. As solid and entertaining an adult drama as you’ll find anywhere.

A starring vehicle for Willem Dafoe, who plays a damaged mercenary hired to track down a lone — and supposedly extinct — Tasmanian Tiger. He spends most of his time forcing his way through deep Australian underbrush, but stops long enough to fall for his widowed landlady (Frances O’Connor), and battle angry locals, including Sam Neill. From the director of TV’s “Dance Academy.”