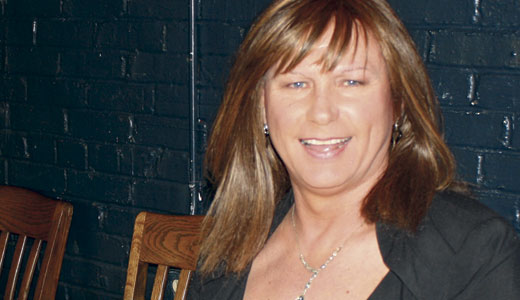 Sunlight floods a musty backroom at Marty’s Tavern in Old Louisville. Only cardboard mariachis near the window block the evening rays spotlighting every errant dust particle. It’s about 7 p.m. Tucked in a wood-paneled corner, underneath an aggressive, roaring air conditioner, Holly Knight sits at a card table manning two laptops, a microphone headset and a glass of Coke.

“Hello,” she says into the headset. “Welcome to Prism Radio.”

For about a year now, Knight’s show — devoted to transgender issues — has broadcast from the website Blog Talk Radio. Occasionally she’ll set up at a bar with Internet access, like Marty’s or the now-shuttered Starbase Q. The public setting lets her friends gather, a silent studio audience, as they must listen to the show through earphones on their own laptops.

The 56-year-old host reminds listeners they can call in with comments before introducing her guest, Masen Davis, executive director of the Transgender Law Center based in San Francisco.

“We all know that transgender people face incredibly high rates of employment discrimination,” Davis says via phone. “I think the National Center for Transgender Equality reports 90 percent of transgender people experience challenges in the workplace.”

“Wow,” Knight responds, though she’s not all that shocked. It’s a reality she knows, having lost two jobs after employers discovered the male they hired was heading toward the future as a female.

The transition that began about 12 years ago felt natural to Knight, of course. Still, she’s taken the process slowly. First, with hormone therapy, followed by minor procedures. Now she lives “99 percent” of the time as a female. Only very rarely, and only with dear, old family members who may not fully understand, does she step into the world as a man.

That tug-of-war between born and authentic self fuels topics for many of Knight’s shows. Her past proves just how convincingly one can obscure this conflict. For 40-plus years, not only did Knight live as a man, she lived a life fashioned from American boyhood dreams.

A picture dating back to the 1970s shows Knight’s former self. Ruggedly handsome, with untamed eyebrows and broad shoulders, Knight’s clad in a Boston Red Sox jersey. Fresh out of college, Knight was recruited by the Red Sox and played a couple years on a minor league team.

Looking back, Knight says she was never really “into guy things.” Except for baseball. Like many in the baby boom generation, the Sellersburg, Ind., native thought she was the only one resisting her given gender. And fate gifted her a convincing disguise.

“I happen to be really good at sports,” Knight says. “And it was a great, great way to conceal, because you automatically, if you’re good in sports as a guy, they’re going to assume you’re macho and masculine.”

Knight got married, fathered a son, and coached collegiate baseball for 25 years. That is, until she stopped fighting her instincts and began her conversion. She knew a transgender baseball coach wouldn’t fly. In fact, she was basically told that. (Knight asked LEO not to name the institution that forced her out.)

Knight switched careers and came out to family, most of whom were supportive. Her marriage ended, she says for reasons beyond just her evolving gender. A few religious friends warned her of the “hell” that awaited, a notion that makes her shake her head and chuckle.

She knows many transgender men and women have had a much more difficult time, and that triggers her coaching instinct. She wants to act as a support, a mentor. The radio show, which she says has reached 10,000 listeners from across the country, allows her to do that. It also gives her a voice in the ongoing pursuit of equality and acceptance.

She chose the name — Prism — as a sort of metaphor. Just as prisms refract and redirect light, she hopes to “redirect knowledge, because there are a lot of misconceptions about what we are.”

Knight has also served as president of Sienna, the region’s only transgender support group and a welcome outlet in an area with a rather small trans community.

As the show progresses at Marty’s on this recent spring evening, one of Knight’s friends, Daiyu (who only wanted her first name used), unplugs her ear buds during a sponsorship break. She says the Internet has birthed several radio shows and video-blogs geared toward transgender individuals. But Prism Radio, and Knight’s perspective, speaks to her.

“There’s nothing cookie cutter about being transgender,” Daiyu says. “We come from a variety of backgrounds.”

Knight hopes to keep the radio show going indefinitely. She also wants to branch out into a web-based television series titled TransView, a take on the Barbara Walters juggernaut “The View.”

She understands the inner turmoil created by hiding one’s authentic identity, and speaking out about it just feels right.

“I don’t know if I would’ve gone crazy,” she says, “but at some point it would’ve been unbearable.”