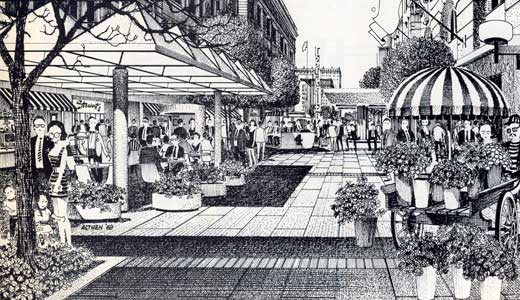 About a month ago, LEO flipped through a book prepared by consultants for the 1969 city/county planning commission titled “Louisville Center City Development Program.” This came a few days after attending the Louisville Downtown Development Corporation’s annual State of the Downtown breakfast, a rally of sorts highlighting incremental progress in the city’s core.

The takeaway? Many of the goals discussed in 1969 mirror those still being bullet-pointed in 2012: the need for retail along Fourth Street, more arts and entertainment, and a desire for downtown residences. Even the rhetoric hasn’t evolved much. Catching up with our regional competitors fueled an urgency in 1969 that still echoes, particularly from the mouth of Mayor Greg Fischer.

This isn’t to say there haven’t been improvements over the past four decades. Hotels and a performing arts center have been built. Our waterfront now hosts green space rather than industry. Perceptions of downtown have improved. And then, of course, there’s the KFC Yum! Center, a project that actually highlights the need for a robust downtown in order to help pay off arena debt.

Downtown growth rests at the confluence of economic conditions, politics and social trends. For instance, many of the ideas published in 1969 likely faded when a new administration took over later that year. Still, it’s hard not to wonder why the downtown that’s been desired on paper for decades hasn’t materialized.

As Jim Segrest looks over the 1969 report, memories stir. The preservationist with encyclopedic knowledge of Louisville history worked for the planning commission in the late 1960s and early 1970s. He looks up from the pages and chuckles. “We always spend a lot of time and money on plans, and we never do it,” he says.

Many of the ideas seem progressive for the time. One proposal called for a network of elevated pedestrian walkways. Authors cited rapid transit as a priority: “The metropolitan area is beginning to reach the size where even the best expressway and bus system cannot serve all of the demands for travel from metropolitan residents. It is clear that some form of a rapid transit system will be required …”

But the predominant message? Stop suburban growth to the south and east: “What has resulted is a development pattern where, today, Center City is considerably off-center in its urban region. Because of this fact, deliberate actions must be taken to ensure that Center City is the most ‘central’ place in the metropolitan area.”

Segrest remembers one of his first assignments at the planning commission was studying how to cap the number of shopping centers approved outside the core, as retail sales continued to plummet downtown.

A rendering for an improved downtown shopping district shows a European-style pedestrian mall for Fourth Street, stretching from Broadway to Liberty, lined with shops, department stores and flowers.

Segrest blames leadership, but also points to the era, a time when fleeing to the suburbs was the ideal. In the late 1960s, civil rights protestors for equal housing and equal rights filled streets. Segrest thinks some trepid leaders, uncomfortable with integration, didn’t know what downtown should be and whom it should serve.

One recommendation from the report that did take root involved land west of Ninth Street. Several years earlier, the city completed urban renewal efforts (i.e. tearing down buildings) in this western part of downtown. Despite the land sitting idle, the report states it should not be immediately included in downtown revitalization: “… it would be a serious error to allow development in this area which conflicts with other areas of Center City.”

The report does suggest using the land for parking, something the authors felt was lacking in downtown. And in order to compete with suburbs, parking must expand.

That way of thinking irks Dan Borsch. The vocal preservationist — who owns a business in Old Louisville and has a background in environmental studies — feels city leaders should not allow commuters’ needs to take precedence when molding downtown development plans. He points to all the one-way streets downtown, meant to efficiently usher drivers in and out. Both he and Segrest believe this discourages dense, walkable streets.

And don’t get them started on all the transportation dollars poured into highways and that bureaucratic behemoth, the Ohio River Bridges Project.

“We’ve spent 60, 70 years under the premise we’re going to build for automobiles. We’re not going to stop on a dime and transform that overnight,” Borsch says. “Or at least I should say the people in charge don’t seem inclined to push it that hard.”

This may spur activity, but many feel the most profound impact on the city’s core will stem from a younger generation eager to locate downtown.