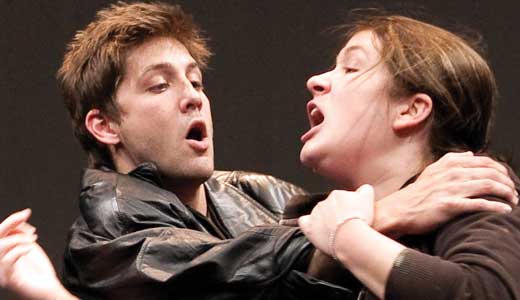 ‘Futura’
Written by Jordan Harrison. Directed by Amy Attaway. A Theatre [502] production that continues through June 9 at Actors Theatre of Louisville, 316 W. Main St. For tickets or more info, go to theatre502.org or call 509-1595.

If the pen is mightier than the sword, how much more powerful is the moveable type printing press, the 15th century technology that enabled mass communication and, more than any other single invention, shaped the modern world?

In Jordan Harrison’s play “Futura,” now running in a Theatre [502] production in the Victor Jory Theatre at Actors Theatre, the answer is clear and bold: The printing press was revolutionary in every possible sense of the word. And so were the innovations that came along with it: cheap paper, the cast metal punches that stamped out the letters, and the sometimes subtle, sometimes radical shifts in typographical style that gave rise to a modern world that overflows with fonts.

“Futura” opens in a lecture hall, where the Professor (Laurene Scalf) discusses the history of writing, paper, printing and, especially, typography. It’s a fascinating account, indeed — complete with stories apocryphal (she repeats the persistent myth that the Library at Alexandria was destroyed by fire in the time of Julius Caesar) and provocative. There is, for instance, the tale of John Baskerville’s typeface. Though it didn’t catch on in England, after Baskerville’s death, his widow sold his punches across the channel in France, where the thin, bold lines of his font were used for printing fiery pamphlets that played a role in the French Revolution. And there’s a fascinating discussion of the German typeface designer Paul Renner, whose radical designs (he invented the Futura design from which the play takes its name) earned him the suspicion of the Nazi party.

As the Professor lectures, her agenda emerges as something far more grand, mysterious and complex than recounting history. For one thing, something strange has happened to her husband. For another, she’s obsessed with the end of physical paper. And she’s fearful that the rise of computer-mediated communication — where nothing is permanent, every document can be edited on a whim, and all documents wind up in the cloud, where they can be reviewed, analyzed and exploited by “The Company” — means the end of privacy and freedom.

And it seems the Professor has a solution to this dilemma, something she calls the Zero Drive — a technology that might be as seditious now as the printing press was 500 years ago.

Not long after she mentions the Zero Drive, the lights go out and the Professor is kidnapped by Gash (Drew Cash), Grace (Betsy Huggins) and Edward Wexler (Tad Chitwood), members of a radical cell that wants the Zero Drive because they, too, are interested in bringing down “The Company.”

It’s a fun and challenging theatrical premise, but Harrison (whose very fine and equally imaginative “Maple & Vine” was a highlight of the 2011 Humana Festival of American Plays) loses his way, and the script spins off into tangled nonsense so silly that even the best efforts of director Amy Attaway and a spirited cast can’t quite salvage it (though one violent special effect did elicit well-deserved gasps from the audience).