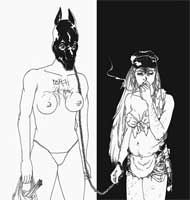 This is music as a blunt instrument. Drummer Zach Hill steps out of his normal zone of “highly technical” (quotes because all his press material uses those words, as has every person I’ve discussed Hill with) forays, adding a rapper who is best described as Waka Flocka-esque and then not mentioned again. Don’t think of this as art; it’s a hodge-podge of found music, a messy, smelly shitpile of samples that is one of the more visceral listens of the spring. I’m not saying I like it; but if the revolution goes down tomorrow, this will be its soundtrack. In 2000, rapper C-Murder released a song that would shut down clubs every night with a fight; this is an album filled with the same raw energy. Break something to this.