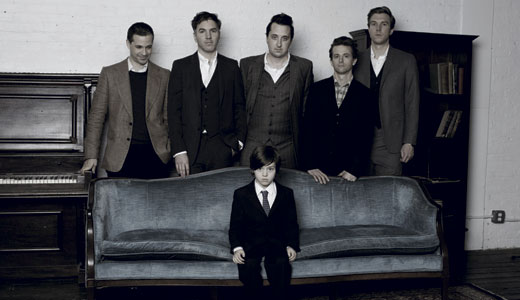 The Walkmen’s music has been called “moody” more than once, and one deep-seated reason for the mournful tinge to their music can be found in Kentucky.

LEO: You went, as a child, to the funeral directors convention?

LEO: Did you actually see bodies? Or just old guys in suits?

HL: Not at the convention, but when we’d be in the actual funeral home in Danville, yeah, we’d see a body every once in a while. Little kids would be daring each other to check it out.

Leithauser and bassist Walt Martin’s mothers are sisters from Danville. The band’s members all grew up in Washington, D.C., and moved to New York in the mid-1990s, but there are even more ties to Kentucky. Multi-instrumentalist Pete Bauer’s wife, Theresa Brown, “went to school in Louisville, and her parents still live there. They always bring a big crowd whenever we come to Louisville — it always feels like a home base for us.”

Bauer has been to “Waterfront Wednesday” before, and encouraged the band to play it. They’re not complete locals yet, though. Bauer and drummer Matt Barrick live in Philadelphia. “I think Pete knows the My Morning Jacket guys through his wife. I met ’em through him one time, but that was a while ago."

LEO: Do you guys write stuff on your own, and then come together, or wait ’til —?

HL: Yeah, we do, because we’re so apart now. I live in New York and Walt lives in New York, we get together occasionally; but (guitarist) Paul (Maroon) lives in New Orleans and is about to move to Lisbon, Portugal, actually. We did all of (the latest album) Heaven by email, basically. Paul came to New York twice, and the three of us got together there. And that was it. It’s a lot of alone time in a room … It’s more productive, but it’s kind of lonely.

It used to be like a gang, the boys club, y’know? You get together and you screw around, just for fun, and that was the whole life of the band. But now it’s much more of a — I work on weekdays, to try to keep a schedule, ’cause you have to have some sort of schedule in your life. But you’re there every day, completely by yourself, in this soundproof room. It starts to get a little bit weird after a little while.

Heaven, the Walkmen’s sixth full-length album, was released last month, and was produced by Phil Ek, whose recent work with Walkmen tourmates Fleet Foxes impressed the band. Two Fleet Foxes appear on the album, which brings up the issue of why, after a decade together, they still open for newer bands. After touring recently with Arcade Fire, the band goes out for a few weeks in July opening for Florence and the Machine.

“We’ve always done opening slots,” says Leithauser. “These days, we just do ones that are so big — like, we just played with the Black Keys, and Kings of Leon — it’s a completely different world for us. Everything about it is different … There’s a lot of business stuff involved in a big tour.

“We’re still kicking. It definitely feels, when you hit the 10-year mark, that’s the first time you look and give yourself a little pat on the back. ‘I did that. Holy shit! I can’t believe we’re still around’ … It’s not easy. In so many ways, it’s not easy.”

LEO: So where are you going to be 10 years from now?

with Trampled by Turtles, The Walkmen, and These United States