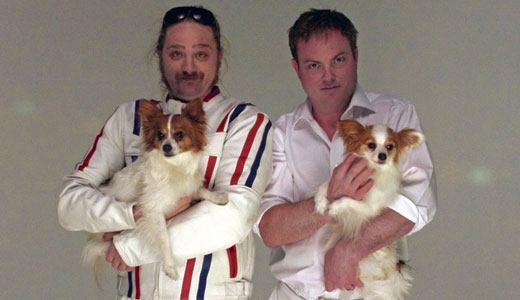 The best thing about Zephyr Gallery is its dual nature — perfect for artists John King and Mike Ratterman to be shown in environments that suit their work. King’s latest sculptures are wood and glass, which take advantage of the light that pours through the front windows downstairs, while upstairs, Ratterman’s work takes advantage of the more intimate windowless setting. Ratterman’s installation is haunting — branchless trees suspended from the ceiling over a ground covered in a layer of course salt, accompanied by the sound of the salt or snow crunching underfoot. From a long line of funeral directors, Ratterman identifies morbidity as a theme in all of his works. King, of Louisville is for Lovers fame, cites necessity, materiality and the female form as the main inspiration for his new sculptural offerings. —Chelsea Gifford

Legendary American playwright Sam Shepard wrote his masterpiece 34 years ago. One year later, it won a Pulitzer Prize. Sixteen years ago, an expansively remastered version of the play experienced a revival on Broadway, and just last year it was produced for the first time in south Australia. Yet somehow, after all this time, all those revisions and all that acclaim, “Buried Child” has escaped ever being performed in Louisville. Perhaps it is due to the play’s heavy subject matter: a nuclear family becomes a nuclear bomb when they realize the American Dream is incongruous with the “American Situation.” This play is, oddly enough, hilarious, mostly resulting from the heartbreakingly funny tactics the characters use to entomb their lives of deception. It’s performed by the Bunbury Theatre Co. —Simon Isham

Pandora Productions cordially invites you to the wedding of the year, possibly this summer’s hottest (and tackiest) event: “My Big Gay Italian Wedding.” This colorful romp through Brooklyn explores the perils of big personalities, and big hair, as hopeless romantic Anthony weds his soul mate, Andrew. A raucous celebration of love and taffeta, the play explores critical themes of tradition, jealousy, cross-cultural understanding, the meaning of family, and how to handle your bat-shit-crazy wedding planner. Pandora invites audiences to join in the fun with post-show wedding receptions toasting the happy couple and prizes for the audience members sporting the best (read: worst) bridesmaid dresses and groomsman attire. Shoulder pads, sequins and pastels all highly encouraged. —Jennifer Harlan

Author Charlie Newton grabs readers and pulls no punches with his tales of Chicago police and the shady and explosive characters in their orbit. His “Calumet City” received nominations for the Edgar and other awards, and now he’s back with “Start Shooting.” Not unlike James Ellroy, Newton is as much a story as his best characters: He’s taken on any number of gambits and could-have-been careers on his way to becoming a novelist. He’s a big fan of Hunter S. Thompson and of the sort of humor thrown around while on a ride-along in a cop car — where you have to find a reason to laugh, because if you don’t, you’ll feel gut-punched. Newton’s coming to Second Story Books Friday night for a reading/signing. (Saturday morning, the author will return to Second Story to lead a “Say What You Mean” writing workshop.) —T.E. Lyons

Gone are the days when Hey Champ was known as “that band that opens for Lupe Fiasco.” The indie disco-tronic trio from Rockford, Ill., have made a name for themselves in the club circuit, where their hit single “Cold Dust Girl” has played on dance floors on every continent save Antarctica. Their latest EP, Anything At All, was released last month. Now they travel to Louisville to play as the only live band on the bill, with DJ Jason Shelton and DJ Persh completing the trifecta, for the fourth installment in Headliners’ Bang Gang concert series. All of the parties are open to 18- to 20-year-olds for a $3 surcharge ($5 for drinkers, $8 for stinkers). —Simon Isham

Though society — and Kentucky in particular — has a long way to go when it comes to eradicating discrimination based on sexual orientation and gender identity, there remains much to celebrate in the LGBT community. And that’s where the Kentuckiana Pride Festival comes in, each year bringing together thousands of LGBT individuals and supporters to celebrate diversity and acceptance. Pride kicks off Friday night with a parade, which has a new route (due to construction) — it’ll travel down Market Street from Tryangle’s to Fourth Street, and then make its way to the party at the Belvedere. Saturday’s lineup of live music includes The Blue Umbrellas, The Ladybirds and Inaya Day, just to name a few. Though coolers are allowed, outside alcohol is not, so leave the rainbow flask at home. —Sarah Kelley

The Gallery on Pearl is the “retirement project” of John Guenther, Mary Ann Guenther, Curt Peters and Pam Peters. To celebrate its fifth anniversary, John Guenther will be showing his new ceramics, with Mary Ann Guenther displaying her new fabric art, needlework and mixed media. “Through the recession and economic turmoil, we have managed to survive, (to) have healthy sales, many exciting exhibits … and establish a presence in the region’s art community,” says John Guenther. While that’s good business news for New Albany, it’s even better for the Louisville/Southern Indiana visual art community. The opening is on Friday from 6:30-8 p.m. The Guenthers will talk about their work at 7 p.m. In celebration of the anniversary, the first 35 attendees will receive a gift. —Jo Anne Triplett

“It’s a philanthropic extravaganza!” says Alicia Kraus, a donor recruitment representative for the American Red Cross. And it is. Almost everything here is free — like free live music and free T-shirts for donors. Green Bean Delivery will donate 10 pounds of food to Kentucky Harvest for every blood donation, and donors can take advantage of the discounted menu just a few feet away inside the Bard’s Town. (Though the restaurant has a great bar, please resist the urge to replace your pint with a pint.) At this special drive, which was arranged by Louisville Public Media and the American Red Cross, you can give a little and get a lot. —Simon Isham

Every couple years, a new guy with a guitar is heralded as the “savior of the blues.” Last year, Gary Clark Jr. became the latest messiah de bleu. He’s from Austin! He’s played with Stevie Ray’s brother Jimmie! Clifford Antone mentors him! He sat in with Clapton! Questlove! He did that White House blues thing with Jagger! This week, we get a chance to see the savior in person and judge whether we are to become disciples. His EP does show promise, featuring two studio cuts alongside two live acoustic cuts, while some of his earlier indie work shows a very young Clark still working out the bugs. Expectations are high for his full-length Warners debut, from both his label to the blues cognoscenti. Get to the gig early to touch the hem of his garment. —Damien McPherson

There’s really no excuse to drink PBR. That’s especially true in a town like Louisville, home to an impressive array of quality local beers, from longtime favorites like Bluegrass Brewing Co., New Albanian and Cumberland to recent additions Against the Grain, Falls City and Apocalypse Brew Works. All these tasty beers will be on tap to quench your thirst at the fourth annual Brewfest, sponsored by the Louisville Independent Business Alliance. And if beer isn’t your beverage of choice but you don’t want to miss out on Brewfest fun, there will be local wines and Heaven Hill bourbon. Given imbibing is the focus of the evening — with some food, giveaways and live music thrown in for good measure — CityScoot will be on call to provide safe rides home beginning at 8 p.m. —Sarah Kelley

Frankfort Avenue has long held the nickname “restaurant row” here in Louisville — well, for the 20th time, the corridor comes together for Taste of Frankfort Avenue at the Clifton Center. In addition to food samples from all the great restaurants, there will be beer and wine samplings, a cash bar, live music and a silent auction. “We’re very excited to celebrate the 20th anniversary of this great event,” says John Harris, executive director of the Clifton Center. “We have some exciting surprises in store this year, but, as always, it’s the incredible food and the generosity of the participating restaurants that make the Taste of Frankfort Avenue such a success.” You can get tickets at cliftoncenter.org or at Carmichael’s Bookstore on Frankfort. Bon appétit. —Kevin Gibson

Not every band survived their late-in-the-CD-era major label signing and subsequent dropping, and few have survived as well as Nada Surf. The New York-based indie-poppers released their seventh album, The Stars Are Indifferent to Astronomy, last winter through respected Seattle label Barsuk to mostly good reviews. Though the band was forced to take a hiatus for a few years around the turn of the last century as they plotted their second act, they are now established vets, safe enough for middle-aged office workers but fresh enough for younger, hipper-than-thou baristas. They’re 20 years old now — 60 in rock years — so catch them now while they’re still in a good place. Read a LEO interview at bluecat.leoweekly.com. —Peter Berkowitz

The Louisville Visual Art Association’s former DinnerWorks has been reinvented, and it’s not just the name. This now biannual event ceased in 2009 but came back this year with a strong exhibition showing at U of L’s Cressman Center. DINNER(re)WORKS features ceramic dinnerware by 16 national artists, including Louisville’s Steven Cheek and Fong Choo (who is curator of the show). There are many events associated with DINNER(re)WORKS. Designer-to-the-stars Matthew Robbins will be in town on Thursday, June 14, to lead an edible centerpiece workshop. The monthly program “Food for Thought” features Choo on Tuesday, June 19. Also on display are new photographs by Julius Friedman. The dinnerware and photography are for sale, with proceeds going to LVAA programming. —Jo Anne Triplett