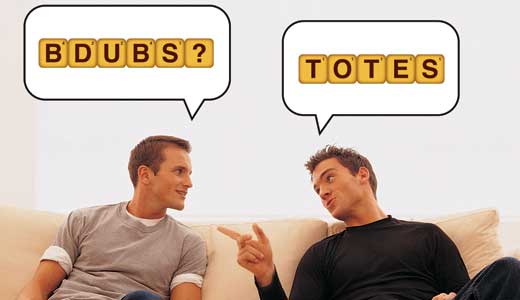 Have real words with friends!

Want to feel bad about your inability to cook, clean and craft like a pro? Well, Pinterest is the place! Here you can find all the crock-pot and cream cheese-based recipes your husband and kids desire, in addition to collecting hundreds of craft ideas you’ll never actually attempt — or if you do, they’ll be a complete and utter failure. (Note: A wine bottle shatters when you attempt to hack off the top to make a planter, something any sane person not under the influence of Pinterest would obviously know.) Here you can also lust after houses you’ll never own, wardrobes you can’t put together, and up-dos not even a high-priced hairstylist could complete in under an hour. Just remember: Those who can’t do, Pinterest.

While the best things in life cost money (and lots of it), there are plenty of awesome free items available on Craigslist. For example, just this week alone I’ve collected one fresh water eel, 50 pounds of three-month-old horse manure, three cans of Enfamil baby formula (expired 2009), a single crutch, hot tub (minus heater, motor and jets), a 42-inch tube TV with slightly severed cord, grocery bag of hotel shampoos, a Betamax, and 12 colostomy bags (unused, of course). I mean, just because you can’t afford a shopping spree doesn’t mean you have to miss out on the euphoria induced by acquiring material goods!

Have Real Words with Friends

Last week I saw a grown man walk into a pole. He was so busy typing on his phone that he failed to see the danger that lie ahead. He’s lucky he didn’t walk into traffic or fall down a hole. Enough already. I dare you to put down the phone and have real words with friends. If you feel the need to think of long words and score points, play a game of Scrabble. Stop playing “Angry Birds.” Instead, listen to and watch the birds in your yard. Addicted to “Draw Something”? It’s called “Win, Lose or Draw,” and it’s available in the toy department at Target. Get some (non-cyber) friends together in the same room and play. Touch a human, not a screen.

Free; all day and night

Who doesn’t like a good, juicy rumor served medium rare? Gossip was around long before TMZ and has dominated conversations for centuries. Is it true? Doesn’t matter. Just for fun, make something up about one of your friends and tell another friend. Maybe he has six toes or a genital wart. Maybe he has a genital toe with six warts. Maybe he made out with someone else’s girlfriend … or boyfriend. Maybe he doesn’t wash his hands after using the bathroom. Maybe he goes to the bathroom on his hands. Whatever it is, make sure it’ll completely ruin his life or destroy his friendships. You’ve got nothing better to do, right? Your life is super boring, why not revel in the pain of others? Celebrities shouldn’t be the only people who are scrutinized. Join in on the fun!

Humana is proud to present the third annual Smokers’ .5 Mile Run, Walk or Crawl. Participants will start at the northern crest of the “wig block” of Fourth Street and trudge through the smoke-free Fourth Street Live! Racers will then resist the urge to plunge straight into the smokers’ paradise of the Galt House taxi stand, instead taking a sharp right and finishing at the Humana Building’s designated smoking park. Organizers have banned chewing tobacco, citing the hazardous gulfs of brown saliva that could potentially pelt passersby. Vicki Bailey, while happy with this year’s route and rules, expressed concern over the early morning start time. “I mean, a lot of us like to spend our Friday night drinking. And how are we gonna drink without smoking a pack of cigarettes?” she said, shrugging. “Really, it’s all about balance in life.”

Enough with this twee cupcake nonsense. It’s time for cake. Ignore the pastel hype of cupcakeries, now a fixture in every gentrified and suburban landscape. For a few bucks you can buy flour, sugar, eggs and oil — or just grab a box of Betty Crocker and a plastic tub of outrageously sweet frosting packed with sugar and preservatives, and go to town. You’ll get 10 times more dessert than those trendy, Lilliputian offerings. If you’re entrenched in this modern confectionary cult to the point where you claim to be “addicted” to cupcakes, here’s the best part — cupcakes are actually cake! So free yourself. Times are tight. Bake a cake. And save a corner piece for us.

Over your bathroom sink

Glued to the side of your car

Sticking out of submarines

Consider the mirror: the ultimate reality show — starring you! Go on, take a look. There you are! And such dreamy eyes. Yes, people have been checking their teeth and pondering zits for years thanks to our friend the mirror. Even as far back as ancient Greece, where 6th century BC hairdressers were forced to look down into mirrors fashioned out of shiny water bowls. Sadly, the wall-mounted water bowl mirror concept failed to take off, and thus the polished metal mirror was developed, ultimately leading to the glass models we rely on today. Just remember, like life, your mirror is fragile — handle it with care and you just might see your future in its depths. But if you should drop it, beware — a shattered mirror means terrible misfortunes coming your way for the next seven years. Mirrors!

It’s been eight months since ear X-tacy closed, leaving a void in the local music scene. But one man’s misfortune is another’s opportunity to make Wall Street fat-cats think twice about their actions. With their old camp shut down, the remaining Occupy Louisville protestors are moving into the record store’s former Douglas Loop home. Though tents will be set up in the parking lot — blocking the entrance to the capitalist monstrosity FedEx Kinko’s — squatting is expected inside the old ear X-tacy in the event of rain, heat, strong winds or general boredom from being outdoors. Ear X-tacy founder John Timmons told us, “I’m so honored by this tribute, I plan to not shower that week in solidarity with the protestors. That will really send a message to iTunes.”