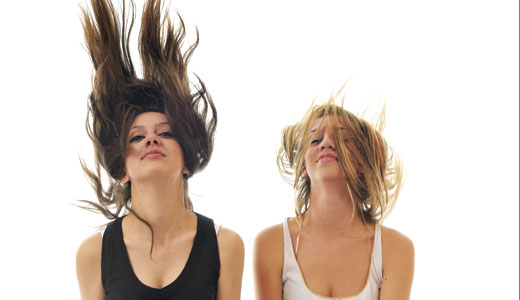 Dubbed “the best show you’ll ever see” by The New York Post, “Billy Elliot: The Musical” is finally making its way to Louisville. Winner of 10 Tony Awards, including Best Musical, “Billy Elliot” tells the story of a young boy in a small British town who trades in his boxing gloves for toe shoes and a dream of the Royal Ballet School. The musical is adapted from the 2000 film of the same name and features songs by Elton John and lots of dance numbers. This touring cast features Louisville native Samantha Cutler as Debbie, the dance teacher’s daughter with a bit of a crush on young Billy. So bring the kids, show some hometown pride, and see for yourself what “electricity” the critics are raving about. —Jennifer Harlan

Quills Coffee is joining forces with Typecast Publishing to present author readings this summer, and Thursday’s lineup of three poets definitely merits some investigation if you’re near U of L and/or looking for more than just a caffeine buzz with your java. Maurice Manning, a Kentucky native who’s recently returned home to teach at Transylvania University, is the feature attraction. He’s held a Guggenheim fellowship, and his most recent book, “The Common Man,” is a celebration of the many dimensions of rural life among the mountains. Louisville’s Chris Mattingly, whose first full-length collection is coming out in a few months, will also be reading, as will Samantha Hall. —T.E. Lyons

Ian Bagg has spent the better part of two decades as a road dog, performing weekend after weekend in clubs all over the world, and appeared on Comedy Central and HBO. You may have caught him on the late-night shows of Jay Leno, Conan O’Brien, Craig Ferguson and Carson Daly, as well. He’s met three presidents (Ronald Regan, Jimmy Carter and Bush No. 1), he ended up on the cutting room floor in the film “Coyote Ugly,” and, by his own observation, he’s “the only man to work with Judd Apatow and not become a billionaire.” For a full interview with Bagg, go to leoweekly.com. —Brent Owen

Who doesn’t like the thought of leaving a better world for the next generation (or, at the rate we’re going, a world)? Then it’s time to cease living like a glutton and start living sustainable. It’s more than a buzzword, folks. And lucky for us, the sixth annual Louisville Sustainable Living Fair can help us navigate the responsible side of life. The evening street fair boasts 50 vendors that will educate Louisvillians on ways to eat local, consume less energy, and realize that, contrary to Muppet doctrine, it’s pretty easy being green. This free event held in Clifton is open to all. —Anne Marshall

There are few things bands (and their publicists) love more than quotes like this: “Wussy have been the best band in America since they released the first of their five superb albums in 2005,” wrote Robert Christgau, the influential critic for decades at the Village Voice. So, why? Well, they’re a damn good band, one of those bands whose fans think should be bigger than Kings of Leon, yet lack some of the elements necessary for world domination. Co-leader Chuck Cleaver, former leader of the Ass Ponys, is a rock veteran and more of a character actor than a classic leading man. Co-leader Lisa Walker has more obvious visual appeal, but their brand of he said/she said indie rock ’n’ roll isn’t the kind of pop that arena crowds go for today. But they’re damn good. —Peter Berkowitz

What better way to close out Pride month than to jiggle your bits on the dance floor? Fleur de Lez, a local lesbian social group, is hosting its monthly “Lez Dance” Saturday night at The Bard’s Town, and all are welcome to get down to the beats of DJ SBW. The dances are always on the last Saturday, and this month’s theme is “show your pride.” To get you in the spirit, here’s the monologue from “Footloose”: “From the oldest of times, people danced for a number of reasons. They danced in prayer, or so that their crops would be plentiful, or so their hunt would be good. And they danced to stay physically fit, and show their community spirit. And they danced to celebrate. And that is the dancing we’re talking about.” —Sara Havens

“I am working the stone a lot more these days; I’ll blink and realize that I’ve carved off a hundred pounds of chips.” That statement shows that Caren Cunningham has been busy in 2012. The Louisville sculptor and Bellarmine University art professor is showing her latest creative output of new limestone sculpture at Hidden Hill Nursery & Sculpture Garden. “Working in stone for the past 12 years, I’ve come to respect and marvel at the hammer, chisel and the stone,” she says. “Beyond whacking my hands here (and) there, it is the subtle nuisances of these three elements meeting that determine everything.” And when you calculate that any given sculpture has received hundreds or thousands of hits — it really is daunting. The reception is Saturday from 10 a.m.-2 p.m. —Jo Anne Triplett

When a band describes themselves as performers of “raucous alt-country with anthemic sing-along songs” whose songs are about “love, loss, pain, drinking and healing,” you’ve already got a good idea of what to expect. Do this at the Mag Bar, and I’m seeing St. Patty’s Day without the tourists; perhaps a semi-authentic Dublin-style night at the pub, or maybe more like a good roadside country bar in the middle of nowhere, with the chicken wire keeping the band safe from the bottles being thrown around like Chris Brown running into Drake at the club. The Nightmares have a new album, Last Goodbye, coming out on Aug. 7, so fans can expect some new tunes the band is still excited to play, and newcomers can expect to share that fresh energy. —Peter Berkowitz

No, they’re not just your average psych-rock band from Brooklyn. OK, so they are that. But they also use synthesizers that sound like old-school video games, and when they’re not jamming on druggy interludes, their shiny pop choruses are pretty bouncy. It’s like John Vanderslice on depressants, or Aqueduct after therapy. This summer’s tour is all about playing off their newly released debut, Conveyor. The album opener, “Woolgatherer,” teeters between weirdo ambience and summer driving soundtrack, with odd tribal calls that overlap beachy calypso twinkling. If this is what summer in the city feels like, we’re in for a treat. Let’s not forget to mention they’re sharing the stage with Louisville’s favorite power-poppers, The Deloreans. It should be a night filled with all the best kinds of sticky guitar licks and synthesizer loving. —Danielle Sills

Louisville takes her Independence Day Festival seriously. Each evening of entertainment kicks off at 5 p.m. with food and the Coors Light Beer Garden, which will both be open through the fireworks at 10 p.m. Children’s activities, including inflatables, kid-friendly rock bands and games, will be available until 9. But most important is the music — Tuesday’s entertainment is a country lineup arranged by WAMZ: headliner Thompson Square, local band Ode 2 the Gnu, and Australian sisters The McClymonts. Wednesday the 4th features reggae legend Jimmy Cliff, neo-funk band Mojoflo, and ’80s dance floor sensations Midnight Star. Outside alcohol is prohibited, but water, chilled and purified by Louisville Pure Tap, is plentiful and free. —Simon Isham

Artist Dennis Shaffner takes a natural approach in his latest installation of more than 50 sculptures. With woven homegrown vines — honeysuckle and aekbia — as well as rattan, Shaffner’s embellished hemispherical and spherical creations draw on traditional Japanese basketry and celestial inspiration, hanging midair and on more terrestrial gallery surfaces. “We’re very excited to have Dennis exhibit,” says curator Bette Levy. “He represents a very different sensibility than our other shows have: contemplative, reflective, lyrical and at the same time, full of warmth and whimsy.” Adds Shaffner: “I feel Kentucky craft has evolved onto the world stage in a level playing field we still try to peg as American craft.” —Eve Lee

Sharon Matisoff is an artist who paints artists. She gave herself a mission — paint artists of national and international acclaim who live and work in Louisville. Some of the local heavyweights included in “Rites of Passage: A Celebration of Louisville Artists” are painter John Michael Carter, ceramicist Tonya Johnson, and sculptor Ed Hamilton. “I love painting the human face and form because of the complexity and beauty inherent in each sitter,” says Matisoff. “My journey over the past year gave me a deeper insight into how each artist approaches their subject. I had no idea how gratifying it would be as an artist to create the paintings for this show.” The artist’s reception is Friday from 6-9 p.m. during the F.A.T. Trolley Hop. —Jo Anne Triplett