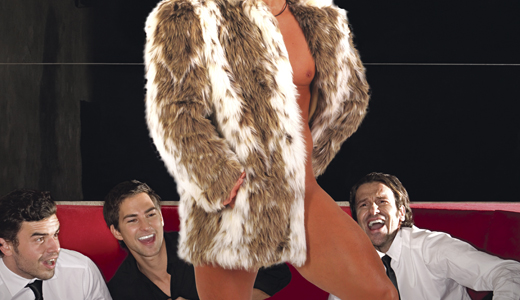 In the shadow of the 70,000-square-foot Creation Museum, Rob Lot’s turned his Petersburg, Ky., auto repair shop into a sordid den of depravity. Inspired by his devout neighbors down the street, Lot has revamped his garage into a Sodom and Gomorrah-themed strip club, complete with plastic palm trees, sand and a drink special called the Sin n’ Tonic.

The club, S&G (a clumsy twist on S&M), is geared toward gay men. Upon arriving, two women dressed as angels seat patrons near the stage where Lot’s strippers, his sons and cousins, perform a range of nude dance numbers to a cassette tape of George Michael and Madonna tunes recorded off the radio by Lot’s youngest, Ezekiel, in the late ’80s. (Lot tells LEO he confiscated this “devilish” music decades ago and finally found a righteous use for it with his new pet project.)

Around midnight, Lot locks all the doors and begins to recreate the fire and brimstone tale that acts as the spine of fundamentalist Christian homophobia.

Reportedly, strippers fall to their knees in prayer and shout:

“Where are the men who came to you tonight? Bring them out to us so that we can have sex with them.” (Genesis 19:5.)

Lot then leaps to the stage dressed in a long white robe. From beneath his sleeves, he reveals blowtorches spraying fire in the direction of the audience. Meanwhile, Lot’s wife and daughters pour table salt (a stand-in for sulfur) over customers’ heads.

Since opening a week ago, Lot has been slapped with 28 lawsuits. A Cincinnati man spoke to LEO about his visit on the condition of anonymity, primarily because he was embarrassed that he actually “paid for this shit.”

“When they started pouring a box of Morton salt over my head, I ran for the door yelling, but there was no way out,” he said. “That guy’s a total psycho.”

Lot declined to discuss the legal headaches his S&G experience has caused, although he did extend a personal invitation to “those two homos from LEO who tried to crash the Creation Museum’s date night.”

Further, he told LEO he’s merely building upon the success of Ken Ham, president of the Creation Museum’s founding ministry, Answers in Genesis. He says the story of Sodom and Gomorrah isn’t the right fit for the family-friendly Creation Museum, so he’s filling that void.

“The heavenly Lord destroyed the cities of Sodom and Gomorrah due to the rampant evils turning man into sexual deviant,” he stated. “If I can save someone from hell with a strip club, I do declare I’ve done God’s work.”