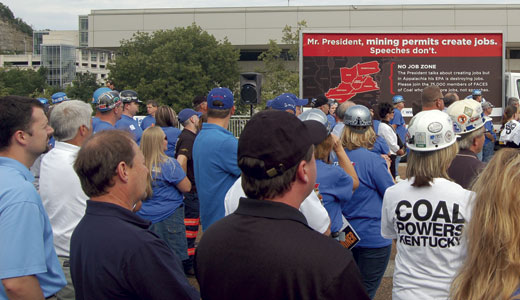 The Environmental Protection Agency rolled into town last week, and those living in the heart of Kentucky coal country greeted them with a large dose of anger and fear.

The EPA conducted three public hearings at the request of the Beshear administration — one in Frankfort and two in Pikeville — regarding the federal agency’s objections to 36 surface mining permits in the last two years.

The objections are due to the Kentucky Division of Water’s inability or refusal to conduct sufficient analysis — in accordance with a new 2009 guideline proposed by the EPA under the 40-year-old Clean Water Act — to determine how a mining operation would affect Kentucky’s water quality standards.

At the hearings — and at raucous rallies organized by coal organizations — lawmakers and citizens unleashed a fierce wave of criticism toward President Obama and the EPA, accusing them of unfairly targeting the coal industry with arbitrary rules and taking jobs away from struggling, poor communities. Or, as they like to say, waging a “War on Coal.”

But a smaller group of dedicated environmental activists and citizens also braved the hostile environment of the hearings to tell their side of the story amidst the heckling and booing of coal supporters who dominated the crowd.

They told the EPA that intervention is necessary due to the failure of state government to properly regulate and prevent the pollution of streams in Appalachia caused by surface mining practices that obliterate mountains to extract coal; the remnants are then dumped into surrounding valleys.

Environmentalists argue that such streams often turn orange due to toxic heavy metals like selenium, and they point to peer-reviewed research of mining communities suffering from a 50 percent increase in cancer rates and a 42 percent increase in birth defects.

And while coal supporters took turns denouncing Obama and the EPA for allegedly putting people out of work, there is ample evidence suggesting that isn’t the case.

Government statistics show that mining jobs in Kentucky have actually increased since new EPA guidelines went into effect in 2009, hitting a 14-year high last year. And though the EPA has blocked 36 permits, roughly 2,600 permits are currently cleared for mining operations.

In recent months, however, there has been a wave of layoffs by coal companies in Kentucky, totaling roughly 1,000 jobs. But these layoffs did not occur at any of the companies whose 36 permits have been blocked by the EPA, and the majority did not even take place at surface mines affected by the new rules.

In fact, when announcing these layoffs, companies have instead cited terrible domestic market conditions for the type of coal mined in Kentucky. The influx of cheaper natural gas — the price of which is one-quarter of what it was just five years ago — has put coal at a competitive disadvantage, as power plants are increasingly finding a cheaper and more efficient alternative in gas. While burning coal produced 50 percent of the nation’s energy before the natural gas boom, that number has fallen to just 34 percent.

Add in an unseasonably warm winter that lowered demand, and many coal companies in Kentucky find themselves with a stockpile of coal that they are unable to sell domestically, decreasing their incentive to keep mines running.

But Kentucky legislators — faced with a fearful and desperate electorate looking for someone to blame — did not take this opportunity to lash out at free-market capitalism.

This was a time for political theater, and they were ready for the spotlight … and for a scapegoat.

Almost 1,000 coal miners and allies gathered outside of the Frankfort Convention Center before the EPA hearing on Tuesday at a rally organized by the Kentucky Coal Association — the public relations arm of the state’s biggest coal companies. They were served a hefty dose of red meat from a bipartisan group of Frankfort legislators.

Speaker after speaker charged the EPA with unexpectedly imposing unreasonable rules on the industry — simply because of President Obama’s desire to “bankrupt” and “crucify” the industry — that will cost Kentucky jobs and take food out of the mouths of children.

Such sentiments were emphasized in stump speeches by not just Republican legislators — including Senate President David Williams — but nine Democratic senators and representatives of coal-producing districts.

State Rep. Fitz Steele, D-Hazard, and Sen. Robin Webb, D-Grayson, let the crowd know that even though they are Democrats, this fall they should vote based on candidates’ coal policies, not by party. Steele would make this more explicit at the rally in Pikeville two days later, fully endorsing Mitt Romney for president.

“Both parties are speaking with a united voice today,” Sen. Walter Blevins, D-Morehead, told the crowd, after explaining that the stress caused by EPA regulations — not the “stuff in the streams” — is the problem in Eastern Kentucky. “That’s what causes death. That’s what causes cancer.”

Rep. Hubie Collins, D-Wittensville, then warned that there were anti-coal “eavesdroppers” in the crowd whom he hoped would turn off their coal-powered electricity and “freeze to death.”

Even a prominent Democrat from a non-coal county — newly elected state Auditor Adam Edelen — joined in by targeting the EPA’s “arbitrary application” of the rules.

“I’m proud to stand with you today to make sure that we are standing on the side of Kentucky jobs,” Edelen said. “Your ability to do that, your ability to make sure Kentucky is able to grow and be a place where all of our people can realize the American dream, is dependent upon putting people in office who realize how important these jobs are.”

Less than 100 yards away in the Capitol Plaza Hotel, nearly 100 environmentalists from Kentuckians for the Commonwealth, Sierra Club and Appalachian Voices held a much more reserved informational briefing in preparation for the hearing, detailing the lack of water quality regulation by the state and its harmful consequences for human health.

“The EPA is not some boogeyman that’s trying to close down the coal industry,” said Sen. Kathy Stein, D-Lexington. “The EPA is a valuable division of the federal government that is there to keep us safe.”

When it was time for the hearing, more than 1,000 people packed into the convention center, with the overwhelming majority cheering as a long line of elected officials bashed Obama and the EPA officials present to hear comments.

Republicans repeatedly claimed Obama was imposing these rules solely on Kentucky and West Virginia — excluding swing states such as Pennsylvania, Ohio and Virginia — to punish those states for not voting for him (which fails to take into account the exemption of the very red state of Tennessee).

The last of the 21 office-holders to speak — and the only one who stood up for the EPA — was Rep. Joni Jenkins, D-Shively, who spoke of the coal ash pollution her constituents endure due to LG&E’s power plants.

“The commonwealth of Kentucky seems ready to embark on a course that will have implications, not just on the mining areas of the state, but for all of the state,” Jenkins said. “By refusing to comply with the EPA and the Clean Water Act, we will disenfranchise the very agency charged with protecting us and our environment.”

The early public comments were from miners and coal company executives, defending the value of their industry and expressing incredulity that the federal agency was putting them out of work.

Almost all of the pro-coal forces left the convention center roughly halfway through the marathon hearing — to catch their charter bus back home — but not before they booed through the comments from those supporting the EPA and heckled them as they walked back to their seats.

Pro-EPA speakers dominated the last half of the hearing, as Jimmy Hall, of Letcher County, and Truman Hurt, of Perry County — both from coal-mining families — spoke of water being polluted near their land due to mining.

Kentuckians for the Commonwealth (KFTC) activist Greg Capillo countered previous assertions that sewage is the actual reason for poor water quality in the region, not coal mining, saying, “Human beings don’t defecate selenium and heavy metals on their own, naturally.”

Thursday in Pikeville was promoted as the main event for weeks, with coal groups planning an overwhelming demonstration of support and condemnation of the EPA in the heart of coal country. KFTC actually recommended that their membership in the area not attend, fearing for their safety.

And although this site attracted a packed house at a similar hearing a few years ago, the expo center was mostly empty for the afternoon session, with fewer than 200 people in attendance. Elected officials and laid-off miners let loose another round of similar accusations aimed at the EPA, until Gary Bentley — an underground miner for Arch Coal in Letcher County — threw a curveball.

Dressed in striped miner gear, Bentley expressed gratitude for all the industry has given his family and the region, but added that “the Clean Water Act has been in effect since (1972), yet some coal companies want to avoid doing what’s right.”

“Faces of Coal, the KCA, I supported them for many years. But now, with all the layoffs, I’ve never seen these organizations come back and help our miners that are out of work,” said Bentley to a round of applause.

The rhetoric only escalated from there, with one speaker suggesting the EPA’s actions are enough to convince the Hatfields and McCoys to unite and aim their weapons at the stage of federal bureaucrats. Another said that coal forces would defeat the EPA just like their ancestors defeated the Nazis in WWII.

After representatives of Appalachian Voices and the Sierra Club were booed throughout their comments, two miners berated activists until police escorted them out — something that happened at all three hearings.

Sierra Club organizer Alex DeSha says such people were the exception to the rule in Eastern Kentucky, as most just wanted to have a civil conversation.

“They’re just scared because they’ve been told that the EPA is going to take their jobs,” DeSha says. “I’d be scared, too. But everything they’re being told is a lie.”

At the afternoon rally outside the convention center, about 100 people gathered around a gazebo — under a banner spelling out EPA as “Extending Poverty in Appalachia” — to hear another round of stump speeches, with the MC instructing them to drown out the “treehuggers” with boos.

Jim Milliman, the field representative for Sen. Rand Paul, blamed latte-drinking liberal elitists of San Francisco and New York City — who get their energy from coal — for supporting Obama’s “War on Coal.”

“And now what do they do?” Milligan asked the crowd. “How do they pay you back? They spit in your eye!”

Democratic Majority Floor Leader Rocky Adkins ripped into a speech that was reminiscent of Fancy Farm picnic oratory, minus the hecklers and sweltering heat. He decried the proposed switch of the nearby Big Sandy power plant to natural gas as “waving the white flag of surrender” and accused the EPA of trying to “break the back of our economy.”

During the sparsely attended evening session back in the convention center, Democratic House Speaker Greg Stumbo — who told people who “love mountains” to “go buy one” — talked up the mountaintop removal “resort” where he resides and the importance of creating flat land for development.

The EPA now has 60 days to make a decision: reaffirm the objections to the permits, withdraw them, or review them further. Whatever the EPA decides, the coal industry hopes their market will rebound, with natural gas coming back to earth and China eager to import their coal.

And if Stumbo, Beshear and their Republican colleagues in Frankfort have their way, there will be no economic or energy transition in Eastern Kentucky.

You’ll have to tear the coal from their cold dead hands.