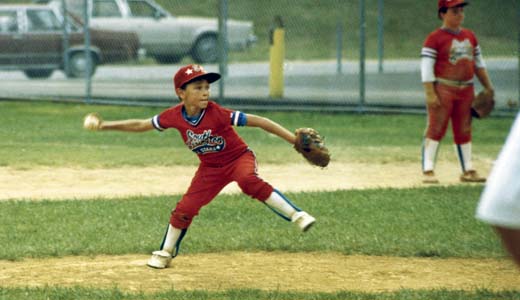 Eastbound and down — By Anne Marshall

A couple Christmases ago, my mother gifted me this framed photo of her three “gorgeous” girls from a “fabulous” summer trip to New York City. Now my mother, immune to New York’s gritty heat, looks stunning. My older sister and I, however, pose as indentured tourists.

Together, we trudged up the Statue of Liberty, pouted through a delicate lunch at Tavern on the Green, and, apparently, refused to feign interest in Rockefeller Center.

In part, I blame my age, the middle school years. Every night away from home I feared demotion into social purgatory. Would I be in or out upon my return? Would my circle of friends redraw lines? I was missing hours at the public pool and weeknight slumber parties devoted to Arsenio Hall, gossip and frozen burritos. Surely, we’d grow apart. Adolescent relationships fracture easily.

So do adult ones that endure 12 years. It’s around this time my parents’ mismatched union skidded into an ugly gridlock that preceded divorce. My mom, perhaps eyeing what lie ahead, whisked us east for a girls’ getaway.

For most of the week, we stayed with a friend of hers who had divorced “well,” landing in a ritzy New Jersey suburb. The two sat under large sunhats, sipping wine, scrutinizing men, as well as a few women whose husbands they pined for.

It really wasn’t so bad. Our host had an outdoor pool, cable television, a daughter my age with a deep archive of Seventeen magazines, and a cute-enough son whose mysterious, artsy presence was well worth wasting daydreams over.

Having revisited this photo, I wish I could tap middle school me’s slumped shoulders and relay two thoughts from two decades hindsight: 1) Cheer up! You just got a free trip to NYC! A reporter’s salary awaits you, so treasure these all-expense paid vacations. Plus, you will one day covet this city. 2) Smile for your mother. She needs it.

The beachcombers — By Sarah Kelley

Time is not a concept easily grasped by children. An hour can feel like an eternity or pass in a flash, depending on the circumstances. The same goes for distance.

I tell you this in an effort to explain my side of the story.

It was the summer of 1985, I was 6, and we were several days into a weeklong vacation in Panama City Beach, accompanied by another family with a daughter my age. As our mothers prepared for their daily jaunt down the white gulf shore, we asked to tag along. Approximately two minutes into the excursion, we realized walking was quite dull, and we begged to return to the swimming pool at our hotel, the Sandpiper Beacon. Worn down by our whining, they agreed to let us make the short trek back without them.

And so our journey began.

Overcome with the thrill of independence (and perhaps confused by the fact that all hotels look alike from the beach), we strolled right on by the Sandpiper. We walked. And walked. And walked. We stopped periodically to collect shells or write our names in the dense wet sand but then resumed our expedition.

Meanwhile, back at the Sandpiper, our parents were frantic. We hadn’t been seen since parting ways with our mothers almost two hours earlier. The police were en route on four-wheelers to patrol the beach where family members were already searching.

My 12-year-old brother had assumed the role of lead detective (rather enthusiastically, or so I’ve been told), questioning sunbathers about whether they’d spotted two wandering little girls, one wearing a Strawberry Shortcake bathing suit. My sleuth of a sibling then stumbled upon an actual clue: names in the sand.

They were on the right track and soon would find us constructing a castle under the pier — 1.6 miles up the beach — carefree and completely unaware that we were lost.

Summers in Florida in the 1980s were pretty good for suburban kids. No school, too young for work … we played a lot of stickball in the streets, rode our bikes around vacant buildings, played Cowboys and Indians — lots of stuff that wouldn’t fly today. When it got too hot, we’d jump into a pool, or duck inside and watch “Wargames” or “Star Trek II: The Wrath of Khan” on someone’s HBO.

Occasionally, there would be vacations. I’ve been to New Orleans once, so far — when I was 10. I’m sure it was fun, though I don’t remember doing anything child-specific; it definitely was educational, though, because the one detail I remember clearly was walking past numerous adult dancing establishments and trying to sneak a peek inside. I didn’t get to see anything, of course, and I don’t know how I would’ve reacted if I had. A year or so later, I got a formal introduction via late-night HBO and a screening of the otherwise disposable teen sex romp “Fraternity Vacation,” and I will always treasure that memory.

But I digress. In central Florida, we were near Busch Gardens and Adventure Island; not too far away was Disney World, and the early days of Epcot (whose incoherent vision of The Future had robot servants cleaning “Mad Men”-looking houses for us humans), as well as other less successful theme parks, like the short-lived Boardwalk and Baseball (formerly Circus World).

It was a kinder, gentler Florida back then, where a kid could be a kid and not have to worry about someone trying to eat our faces off. But I wouldn’t want to go back. New Orleans, though, is at the top of my list.

Bottom of the ninth — By Joe Sonka

From the age of 4 until late in high school, virtually every summer memory I have involves playing baseball. My older brother Mark — set on molding me into the next Dale Murphy — spent countless hours in the backyard helping me hone my craft by playing the Sport of Kings: Wiffle ball. We played most of the 1984 Atlanta Braves schedule, which was great fun, partly because he let me win and the Braves had a formidable 101-8 record.

My prodigal status in tee ball and Little League peaked at age 11, when I finished the season with an age-leading .511 batting average. But my skills only regressed from that point in relation to my peers, as did my enjoyment. My last summer of actual fun playing baseball was when I was 15, mostly because this was the last year I pitched. My fastball was relatively slow, but I had good control and rarely walked a hitter. My go-to pitch, however, was my very slow breaking ball, which would dive from the batter’s head at the last second into the strike zone, or would be chased as it plunked into the dirt.

That season, there was one game where I couldn’t get my curveball over the plate, and I was lit up like a pinball machine. However, our team managed to rally from a 10-run deficit and took the lead in the top of the last inning. In the final play of game — after I had given up my millionth hit — I relayed the throw from the outfield to home plate, where we cut down the tying runner. The final score was 17-16, which I choose to believe was the only time in baseball history that a pitcher threw a complete game giving up 16 runs and still got the win.

I spent most of my childhood summers constructing castles of sand on the beaches of Lake Erie, which my mom explained was an ocean without sharks. I didn’t always believe her as I ventured far into the waters … past the point where her scolds were audible. I was off to find a dolphin or a mermaid to be my friend. I paddled as fast as one could with floatation devices strapped around her upper arms. As soon as I thought I had reached freedom, I felt a hard slap on the head and a shove under water. My older brother had squelched my dreams yet again.

My uncle owned a boat and a trailer home on the lake, which is where we would converge for a week or two without plans, deadlines or curfews. It’s where I learned how to fish. How to toast a s’more just right. How to puff a cigarette (of the candy variety) and look cool. I got acquainted with the term seasick while trying to nap on a moving boat. I discovered my disdain for seafood and Circus Peanuts. I understood the importance of having an extended family and knew someday my brothers and I would be the age of our parents and would have similar vacations — even though I never thought I’d be as old as my mom.

Summers on Lake Erie were perfect. Perfect for a kid who had yet to taste anxiety and self-doubt. Perfect as a stroll down the street to the candy store with 75 cents in your pocket. Perfect as an ocean without sharks.

Mix it up: Sounds of summer

10 things to do this summer