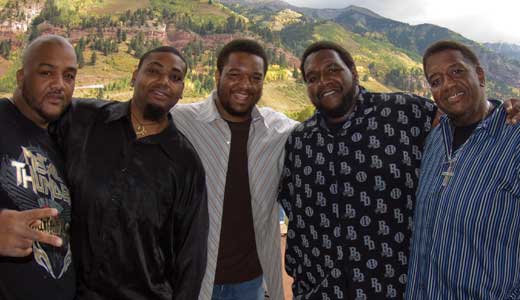 The Lee Boys are a bit of an anomaly on the jam band and Americana circuits, even though there’s little more American than a family band jamming on traditional music inspired by the church — and set to a rockin’, funky beat. The Miami-based Lees (three brothers plus three of their nephews) play a style called “Sacred Steel,” brought to the public by Arhoolie Records and popularized by Robert Randolph. They’ve become close with The Allman Brothers Band and The Del McCoury Band, among others, and perform in Louisville on Tuesday. Guitarist Albert Lee shared the word with LEO.

LEO: You guys play a lot of festivals, and with many different types of bands. Do you think those crowds know what you’re often singing about?

Alvin Lee: Yes, they most definitely know what we’re talking and singing about.

LEO: Do any young rock ’n’ rollers ever tell you to leave the church in church?

AL: Not really, ’cause we are about spreading a message through our music, not really preaching religion, so we can appeal to a broad-range audience.

AL: They are like our brothers from another mother. We really connected back at Del Fest three years ago, and Ronnie came on stage with us. Ever since then, we bonded like brothers. Playing festivals and shows together, we call it Sacred Grass, where bluegrass meets Sacred Steel.

LEO: You’ve been fortunate to have played with so many great groups and at events like “Conan” and the Kennedy Center. What are your favorite memories?

AL: Well, we have really been humble about our whole musical career. One of our greatest memories was playing Merle Fest some years ago and having this guy standing on the side wanting to jam with us; we didn’t know who he was, and my manager was telling us to let him jam, and the crowd went crazy when he came on. Later we find out it was Bob Weir from the Grateful Dead.

… We also opened up for Little Richard and B.B. King. Next for the Lee Boys, we just signed with Warren Hayes’ label, and we have our new CD coming out late summer/early fall.

LEO: How much time do you spend on the road each year? What are your family lives like?

AL: Well, we do about 100/120 shows a year. Two of us are married and the rest are not. So, four of us do this full-time, and my other two brothers have full-time jobs. But we all have very supportive families. Also, our boys and other younger nephews are training up in the tradition as well, so the legacy will be passed down.

LEO: How much brotherly bickering goes on?

AL: Well, as much as expected from three brothers and three nephews. But, at the end of the day, we love each other and — for the most part — get along.

LEO: How was your experience playing in Thailand? Is that the farthest place music has taken you?

AL: Yes, it’s the farthest so far. It was a different culture, but you can tell that music is the universal language. Everyone received us well and got into it.

LEO: I was very sorry to read about your sister’s passing. Would you be willing to discuss how you’ve all been dealing, and if music has helped at all?

AL: Yes, it’s been hard. She was the youngest girl in the family and the mother of the bass player, Li’l Al. But our music has really helped us all heal, and we know she is smiling down upon us and now resting in a better place.