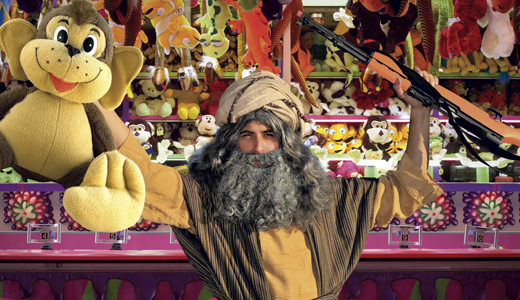 MUHLENBERG COUNTY, KY — Gov. Steve Beshear attended the ribbon-cutting ceremony Monday for the opening of Koran Kountry, the radical Islamic theme park that could receive up to $75 million in tax incentives from the state.

“We are excited to be here for the grand opening of Koran Kountry,” Beshear said. “This park will bring almost 1,000 jobs to this region and give a vital boost to our economy, with millions of tourists visiting the commonwealth.”

The controversial park is the creation of Answers in Koran, LLC, who seek to bring visitors to the “family-friendly attraction that celebrates the truth of the Koran, and the power of the global jihadist movement to liberate Muslims from the oppression of the infidels and Jews. We also have roller coasters.”

The $300 million park, built on top of a reclaimed surface mining site in Muhlenberg County, was constructed with the help of unnamed international investors from Pakistan and Iran. Their feasibility study projects millions of tourists from the Middle East and South Asia will come to the park in its first three years of operation.

“This day would not be possible without the great help we received from the Beshear administration,” said Kenwal Hamza, CEO of Answers in Koran. “Muhlenberg County is now truly the closest thing to Paradise on Earth.”

In addition to potentially $75 million in tax rebates from the state if the park meets its attendance projections, the state also spent $27 million on infrastructure improvements to the Wendell Ford Parkway and the Muhlenberg County Airport to accommodate the influx of tourists.

Koran Kountry contains a dozen thrill rides, including the Dead Sea Water Safari and the “Paradise Sling Shot,” which flings riders 400-feet straight up into the air, “recreating the ascension of the prophet Muhammad into the heavens.” There are also carnival-type games, including one in which people throw rocks at a female mannequin wearing a bikini in order to win a prize. The park also contains several high-tech multimedia shows in the “Martyrs Exhibit Hall,” celebrating the history of such groups as Hamas and Hezbollah, and attacking “the Zionist and Christian crusaders who occupy our homeland.”

Despite the extreme fundamentalist message of the park, Hamza says they will not discriminate against non-Muslims when it comes to admission or hiring practices, a condition set by the state in order to receive the tax rebate.

“We welcome everyone to the park, even the infidels, whores and sodomites,” Hamza says. “We hope they receive our message, see the error in their ways, and come to accept our true interpretation of the Koran, which has been compromised and distorted by ‘moderate’ and ‘tolerant’ so-called Muslims in America.”

As was the case with the Beshear administration’s support of $43 million in tax incentives for Ark Encounter — the evangelical Grant County theme park offering a full-size recreation of Noah’s Ark, built by a 600-year-old man 4,300 years ago and stocked with dinosaurs — critics claim the deal violates the separation of church and state.

“We examined the religious issues when they applied,” says Gil Lawson, Tourism, Arts and Heritage Cabinet spokesman. “And at the end of the day, they are a for-profit company with a theme park, and they’ve applied — just like everybody else — under this incentive program, and they’ve been considered and determined to meet all the requirements of the law.”

Criticism of Beshear and Koran Kountry has also come from a wide religious and political spectrum in Kentucky.

“Islam is a religion of peace and tolerance,” Issa says. “But Koran Kountry is giving a platform to the most radical and hateful elements of Islam, which are a small minority and not representative of the millions of moderate Muslims in America that reject their intolerant and misguided interpretation of our religion.”

Conservatives and evangelists have voiced the most staunch opposition to the park — despite fully supporting the Christian equivalent — and a group of 1,000 protested outside Koran Kountry on opening day in a rally organized by the American Family Association, Family Foundation, and a coalition of Tea Party organizations.

“Gov. Beshear thought he could fool us with his support of the wholesome Ark Encounter, but now we know the truth,” said Frank Simon, president of the state’s AFA chapter and the Tea Party of Kentucky. “His real agenda is to bring Sharia law here to Kentucky and wage a ‘War on Christians.’”

The park’s grand opening even elicited a barbed tweet from former vice presidential candidate Sarah Palin: “Look who Dumbocrats r palling around w/ in KY, the terrorists who want steal our freedom & liburty soes they can kill us. Only in Obama’s USA.”

Gov. Beshear has remained steadfast in the face of such charges, saying that even though he might not agree with the religious message of the park, the economic benefits of Koran Kountry make it worthy of his administration’s support.

“I wasn’t elected to debate religion,” Beshear said. “I was elected to create jobs.”

Despite the criticism, Beshear continues to push his new tourism initiative, ultimately hoping to bring a wide range of religious theme parks to Kentucky, labeling the commonwealth “God’s Playground.”

The Tourism Cabinet has already been in talks with companies planning to build parks throughout Kentucky celebrating Buddhism, Hinduism, Mormonism and Scientology.

The Scientology park — Hubbard’s Space Extravaganza — is nearing final approval by the Tourism Cabinet and Kentucky State Fair Board. The theme park is one of several proposed uses for Louisville’s idle Kentucky Kingdom park, which until recently was slated to be reopened by the owners of Holiday World for a project dubbed Bluegrass Boardwalk.

Louisville native Tom Cruise is a major investor in the Scientology park, which will feature a state-of-the art 3D ride depicting the journey of alien intergalactic ruler Xenu’s trip to Earth 75 million years ago.

Earlier this year, the state inexplicably turned down the proposal of former Kentucky Kingdom owner Ed Hart to build a Judaism theme park (dubbed Kingdom of David), despite the fact that he had sufficient funds and previous success running an amusement park.