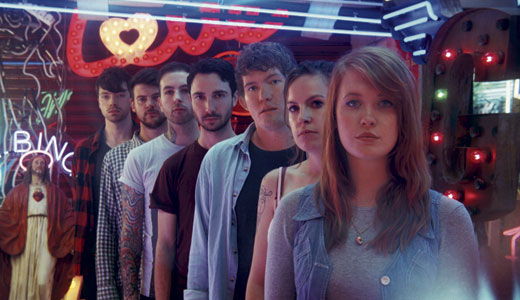 Los Campesinos! are the UK’s best-known indie rock band with an exclamation point at the end of their name. The literarily minded yet goofy bunch emerged in 2006 at Cardiff University in Wales, though none of the founding members are Welsh. Their fourth full-length album, Hello Sadness, was released last fall.

Guitarist Neil Campesinos! (aka Neil Turner; all band members pretend to be named Campesinos! professionally, a la the Ramones) spoke with LEO Weekly from his bedroom in Cardiff.

LEO: Are you aware of the “Fuck Yeah Neil Campesinos!” Tumblr blog?

Neil Turner: Yeah, I’ve seen that. Not to, like, check it out, but I have seen it.

LEO: How do you feel about that kind of tribute?

NT: Everyone’s got one. There’s “Fuck Yeah” for everyone who’s anyone now, so (laughs) … I don’t know. It’s interesting. But I can’t get too caught up in Tumblr. It seems to be for people between the ages of 23 and — how old am I? I’m going to be 27 this year. I just think I might have missed Tumblr and things like that. If it were around when I was a teenager, life would have been so much … worse! Harder.

It’s funny, when we’re on tour, we check out the Los Campesinos! tags on Tumblr just to see what people think of us — there’s a lot of people writing exciting reactions. But it’s, like, the photos at each show are crap. We hang out by the merch table to say “hi” to people, and there’s always fans who are really drunk, who want to pose for a photo. “Yeah, sure!” And you’re all sweaty and drunk. The next day, you go on Tumblr and you’re, like, (moans), “Oh, God, I look awful.”

LEO: The band certainly has fun. You’re known for putting on a great live show.

LEO: (laughs) Tell me about that.

NT: (laughs) It’s just what we’ve always tried to do. And now we’re older and fatter and more jaded (laughs). But, as soon as we get on the road and get going, there’s nothing you can really compare it to. Especially after a few beers. There’s a theme developing here, isn’t there?

LEO: (laughs) Well, Louisville’s a big drinking town, so I think you’ll fit in quite well.

NT: Yeah. We’ve never played in Kentucky before, and I’m really looking forward to it, because of the musical heritage you have, so many incredible bands I like are from there. Will Oldham, Slint — Bastro and Squirrel Bait, David Grubbs’ bands — they’re from there, aren’t they? Shit like that.

LEO: Will, we see him around. For all you know, he might be at your show.

NT: I doubt it. (laughs) He’s not part of the Tumblr generation, is he? No, I’m joking, but I’d be very surprised. I’ll put him on the guest list, just in case.

LEO: Maybe he’ll see this article and know that it’s waiting for him. It’s always nice to hear from musicians around the world who are aware of what people are doing here.

NT: Yeah. We’ve been coming to the States since summer of 2007, and it’s the first time we’ve gotten to come (to Louisville). It’s a shame it’s taken so long … It will be the third show in, so it should be good. About a week later, we’ll hit a wall (laughs) and have to stop drinking. Go to Whole Foods for breakfast, lunch and dinner.