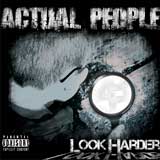 Louisville has some solid live hip-hop acts. I don’t need to list them; they’re already playing somewhere around town this weekend. The bar got raised, however, when Actual People launched their debut album onstage at ZaZoo’s. I’d say it’s a little unfair because Actual People are a live band, but what’s stopping Louisville’s other emcees from getting a guitarist? Look Harder tries to capture all their live energy onto disc, and mostly succeeds. CJ Prof is one of the most aggressive yet nimble emcees you’ll ever hear. The passion, anger and humor he displays throughout the disc will carry the group as far as they’re willing to travel. The production is a dense, at times murky, gumbo of rock guitar and breakbeats and live deejaying. If you need convincing, look no further than the title track.