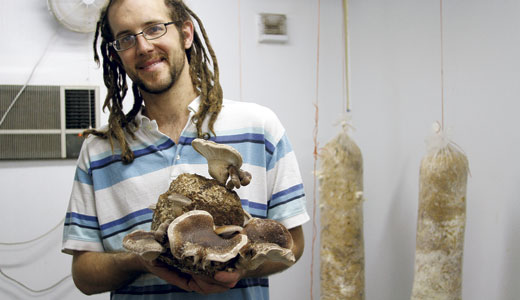 Some people eat, sleep and breathe their passions, then there’s Eric Osborne. The 33-year-old owner of Magnificent Mushrooms has been known to literally sit on the ground and commune with his obsession, a state he calls “mushroom consciousness.” Based on an 87-acre farm in Paoli, Ind., Osborne studies, cultivates, forages, writes about, paints and teaches all things fungi in and around Louisville.

When speaking with Osborne, this font of ethnomycology might convince you that civilization has mushrooms to thank for its very existence. The apocrypha Osborne shares places the victual in ancient cave paintings, in the bellies of flying reindeer, feeding Moses and the Israelites in the Book of Exodus, even in the Garden of Eden, where Amanita muscaria — the magic variety — is considered by some scholars to be the original “Tree of Knowledge.”

Fascinating as this lore may be, Osborne is clear: His true mission is to bring gourmet and medicinal mushrooms out of the forests and into kitchens, striving to make the food more accessible, to demystify the complex growing process, and erase preconceived notions (like the hallucinogen thing, that they’re grown in dung, etc.).

“For me, mushrooms are a spiritual experience, and I don’t mean trippin’ mushrooms. This is the food of life,” says Osborne.

What started as a hobby 10 years ago quickly blossomed into a burgeoning business in late 2010. After beginning small at farmers markets and through local restaurants like Le Relais, demand began to increase with the help of social media. It wasn’t before long would-be clients were hitting the “like” button — namely, The Root Cellar in Old Louisville and Grasshoppers Distribution, a mobile CSA.

“People have been telling me how crazy I was all these years, but now, even my parents are starting to see it. Before they thought this was just some fringe thing, like, ‘Oh, there goes Eric again,’” says the former reggae singer and dancehall DJ. “I didn’t know it would take off this fast or be this well received.”

Osborne, who says he’s still new to farming, is handling the sudden growth in stride. He’s expanding the operation with larger grow rooms and upgraded equipment already in route to the farm. During a tour, Osborne points to a state-of-the-art fogger still sitting in its open crate like an unwrapped Christmas present. He reveals that he’s waited a decade to buy this machine and, when explaining its function — spraying perfectly sized beads of mist into the air (5-50 microns is ideal) — the exacting science of making mushrooms becomes clear.

It’s a knowledge Osborne isn’t stingy with. He’s currently contributing to two cultivation manuals and regularly heads workshops. For those interested in learning about this craft and acquiring a shiitake log of their own, the Mushroom Man’s next course will be held at the Louisville Nature Center on Saturday, July 7 (magnificentmushrooms.com).

Osborne’s connection to these edibles is profound and instantly apparent — as is the value he places on them. He speaks of what the Japanese call “the dancing mushroom” (maitake), so called because upon finding these valuable clusters, gatherers would break into a celebratory jig. This was with good reason, as maitake were worth the weight in silver at the time, Osborne explains.

Asked if he has his own maitake dance, the occasional forager, who might emerge from Hoosier National Forrest with pockets full of chanterelle, chicken-of-the-woods or oyster, says, “Oh, I always dance for maitake. And reishi. When I find reishi, I sit and just meditate with them for a minute. They have a 3,000-year documented history of use and are considered to be the herb of immortality. They’re a great mushroom just to get to know.”

We move on to a climate-controlled fruiting chamber that carries the delicious musk of the deep woods. The room is lined with blocks of shiitake the size of portobello and a puffy, creamy-white variety called lion’s mane. Later in the day, a sample of the latter breaks easily into tender chunks, and when sautéed in butter — at Osborne’s behest — the taste and mouth feel is remarkably akin to crabmeat.

As the tour winds down, Osborne stops before his cherished reishi, a shelf-like mushroom with varying dark brown tones. The Vietnamese call it the “supernatural one.” The Chinese call it the “herb of immortality,” explains Osborne, praising its cancer-fighting abilities. He repeats, “I just like to sit with them. They take so long to grow, and they’re so quiet.”

We stop for a brief moment and listen. It’s quiet. Of course it is. But it’s not hard to see what Osborne means. Later, when asked about his moniker, Osborne laughs it off at first, and then adds, “I do want to be the Mushroom Man. I want this to be my life. I never dreamed it would take me over like this, but it sure has.”