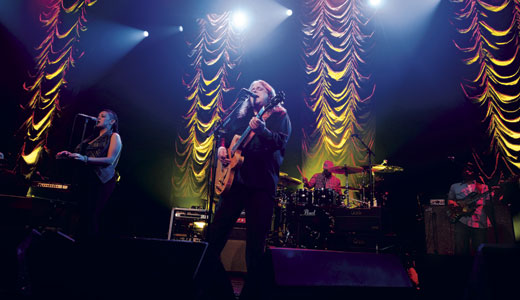 If anybody else claimed to be “rock’s foremost MVP singer-guitarist” on their website, it would be dismissed as self-serving hype. Not so for Warren Haynes, whose résumé includes working with the Allman Brothers Band since they reformed in 1989, various configurations of post-Grateful Dead ensembles, and more. LEO spoke to Haynes regarding his upcoming tour.

LEO: Gov’t Mule hasn’t been touring much over the last year or two, but you seem to be ready to hit the road running. What about Gov’t Mule excites you about going out on tour now?

Warren Haynes: All the projects are different. That’s one of the things I love doing — being able to go back and forth between different projects. Gov’t Mule is something that’s been going on since 1994, and I have an emotional investment in this band and this music and these people, and we want to continue this, continue recording, continue touring. It’s a very unique chemistry and sound that this band has, and so we’re all excited to be back in full force after taking a year off. It was nice to have a break; we haven’t had one since 1994. Everybody’s just itchin’ to play together and really lookin’ forward to it.

LEO: Tell us about your connection with Dr. John, please.

WH: Well, I’m a big fan. I’ve listened to Dr. John’s music all my life. We’ve known each other for a long time, played together a few times. This last time at Jazz Fest was really very special for a few reasons. It was Jazz Fest, it was us playing together, but it was also in celebration of Levon Helm’s passing, so we did a tribute to Levon as well. It was through that whole process that these shows together came about. I think it’s a really interesting match of bands; I think it will appeal to people who really love music. There’s some common ground between the two audiences, but there’s also some differences, and I think that’s what a good package is built on.

LEO: You’re starting to make a new recording with Gov’t Mule. Could you tell us about that?

WH: We’re in the beginning stages, although we’ve recorded a lot of material at this point. We’re gonna get as much done between now and when we go out on the road as possible. We’ll continue to write and perform some new stuff, then later in the year go back in the studio and do some more. You know, it feels great, it feels like Gov’t Mule, but it doesn’t feel like anything we’ve done in the past. That’s always our mission, with any studio recording — to make a record that has our personality but doesn’t sound like a record we’ve already made, and we all feel very strongly about this.

LEO: How do you and your bandmates approach the writing process?

WH: A lot of the songs I write by myself in my spare time. A lot of the songs are written collectively when we’re in the mode of jamming and turning whatever happens into a song. It can be at sound check, at rehearsal, even in the studio. Every song is different. It’s very important to us to have a record that’s well balanced, that goes all over the place stylistically and melodically and, from a tempo standpoint, that covers all the different bases of Gov’t Mule. A lot of the uptempo songs are written collectively; some of those songs start out with the music first and I add the lyric later. A lot of the midtempo and downtempo songs, I write the lyric first and the music later. But there’s no tried-and-true formula. As my friend Gregg Allman says, “There’s as many ways to write a song as there are songs.”

Haynes also commented on improvisation, noting that while he doesn’t consider himself a jazz player, he’s listened to jazz all his life. His various projects all have “a jazz philosophy that’s applied. It’s based on call-and-response, and improvisation where we don’t know what each other’s going to play until we hear someone else play something that inspires the next moment. It’s kind of a moment-by-moment onstage composition that’s based on intent listening to one another, and response, and trying to shut off the thinking part of your brain and only open(ing) up the creative part of your brain.”