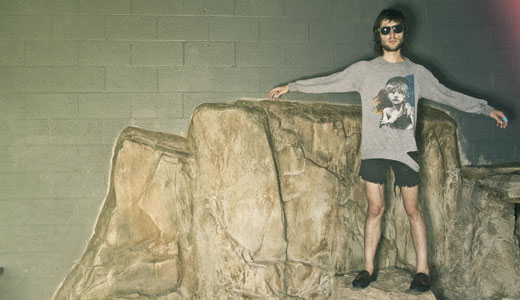 There’s no hate or peace with Pujol on stage, but there is adventure.

“If the beginning has no end, it’s up to the listener to decide,” says frontman Daniel Pujol. “Basically, it’s like choose your own adventure.”

Daniel Pujol rose to the surface of Nashville’s music scene in MEEMAW before splitting obligations under his own name. After descending from the Music City on a tour that trampled through Zanzabar a year ago, Pujol (the band) rattled the windows with insistent, Southern-tinged garage rock. Consistent line-up changes became a temporary setback for conjuring new material, but Pujol says the current group is a long-term, solid three-piece of Pujol’s mates from marching band.

“(Pujol) is kind of like marching band. It’s cool — like my high school fantasy when I’m older.”

Four months together have proved productive, with the release of United States of Being, Pujol’s debut as newbies on Saddle Creek. A fresh line-up and full-length now unify the band’s roster of EPs into a tidy discography.

“I’ve had seven different bands in a year and a half,” Pujol says. “It’s very difficult, because you end up teaching the same song over and over and over again … Now, it’s just got to a point to where we’re talking about stuff like guitar tone. It’s a little more grown-up and groovy.”

Pujol’s narrative voice takes an objective responsibility for the characters and situations he sings about. “A lot of the narrative voice that we experimented with (in MEEMAW) kind of trickled into stuff I do now.”

He advises those with angst-driven lyrics to write from the perspective of their dislikes, instead of reveling in hate. “It’s a lot of being in the middle of an interpersonal situation. We’re circling the idea or situation through many different angles throughout the verses.”

The idea for Being’s sugary-crunch closer, “Psychic Pain,” was conceived similarly from a personal experience. “Have you ever been so upset about something that you’re physically in pain?” Most know the feeling, but it’s hard to describe.

“It’s about being at the mercy of a very intense feeling or experience that you aren’t equipped with the language to externalize from yourself,” says Pujol.

These moments when we’re on the edge of accepting disappointment and hopelessness cut the deepest. “Psychic Pain” exemplifies the magnetic appeal of Pujol’s sound — it’s music crafted to promote unity.

Historically a symbol for colonial unity, Benjamin Franklin’s “Join or Die” serpent scowls on Pujol’s bare chest on the cover of United States of Being. The album is nostalgia-ready, with the detached viewpoint of a hip Charlie Brown.

“I’m really into the Vince Guaraldi Trio, and that’s the kind of direction I’d like to take.”

Of course, this takes more than a three-piece rock band. Pujol foresees additional members in the future: “An electric violin player or an electric piano player,” he says. One candidate is Mitch Jones, who recorded the jovial barrelhouse key work on their debut.

“It’s like working on a car. Now it’s running and now we’re putting racing seats in it.”

Pujol with Animal City and Mote