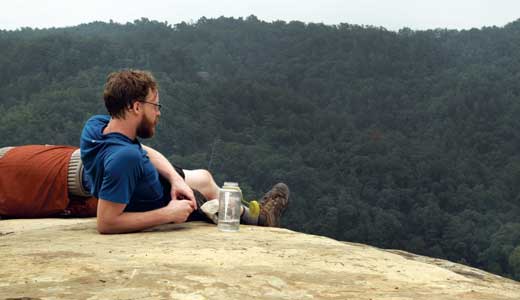 The artist Marina Abramovic began to get noticed in the ’70s when she would sit stone-faced for several hours, permitting audiences to do as they pleased with her. (At one show, she upped the ante by leaving a loaded gun on a table.) Last Tuesday, the Flyover Film Festival and 21c Museum Hotel brought the “grandmother of performance art” to town for a screening of “Marina Abramovic: The Artist is Present,” an HBO doc that trails Abramovic during her 2010 Museum of Modern Art retrospective.

This warm-up event was typical of Flyover’s programming: challenging, stylish and usually with some form of local relevance. In this case, the film’s director, Louisville native Jeff Dupre, accompanied Abramovic.

Dupre is an Emmy-winning TV maker last featured in these pages before the premiere of his six-part PBS documentary “Circus.” His year living amongst clowns and acrobats recalls another Louisville filmmaker who split town to join the circus — Tod Browning, director of seminal works like “Dracula” (1931) and “Freaks” (1932). On Saturday night at Headliners, the festival will acknowledge Browning with a showing of “The Unknown,” starring Joan Crawford and a knife-flinging Lon Chaney. Making this a bit cooler will be the guitar, bass and drums outfit Seluah, punching up the soundtrack of this silent film with a live set.

The new film from the makers of “Tim and Eric Awesome Show, Great Job” and “Tim and Eric’s Billion Dollar Movie” (you guessed it, Tim and Eric) will also run as part of the Headliners program (special price, $15). Apparently, “The Comedy” sent some seething audience members fleeing during its Sundance premiere, indication that “anti-comics” Tim Heidecker and Eric Wareheim succeeded in their artistic agenda. Director Rick Alverson will be on hand afterward to answer for what his two charges have wrought.

Flyover will deliver dozens of other features, documentaries and shorts, all making their Kentucky premieres. Another highlight should be Thursday night’s “One Big Holiday,” which follows hometown heroes My Morning Jacket as they break in the spanking new Yum! Center. The 29-minute doc from Michael Feld and Christopher Guetig caps an evening of short films that includes a quite cute (and impressively rendered) homage to silent films called “The Executive.” With a seeming wink to the Occupy movement, this pauper-turned-suit parable was made and starred in by a duo of Louisville teenagers (Matthew Rivera, 15, and Evan Sennett, 16) who use hand-spliced 16mm film to replicate the era of Chaplin and Keaton.

Friday is ladies’ night with two promising features from female directors. Martha Stephens, who has become something of a Flyover darling, returns to the fest with her latest film, “Pilgrim Song,” about a rambling musician who hikes Kentucky’s Sheltowee Trail. Stephens’ “Passenger Pigeons” was a standout at Flyover III. Also playing is a first-feature from indie starlet turned director Amy Seimetz. Like “Pilgrim Song,” Seimetz’s effort, “Sun Don’t Shine,” won big praise at SXSW this year.

There’s more girl power when Flyover resumes on Saturday with Andrea Arnold’s retelling of “Wuthering Heights.” For a preview of what Arnold is capable of, check out her stunning 2009 film “Fish Tank,” currently streaming on Netflix. “Wuthering Heights” screens at noon at the Dreamland Film Center.