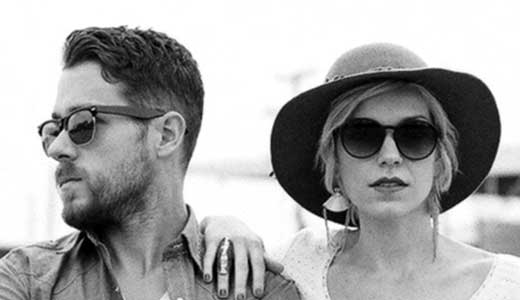 In the decade since Nicole and Josh Johnson got together, much of the cultural landscape has shifted, but the married duo caught up and now might be heading toward big things.

Back then, serious musicians didn’t appear on reality shows, most folk-leaning duos didn’t care much about their looks, and folky male/female duos didn’t have mainstream success. But reality shows have become a reality, fashion has become re-integrated back into music after years of neglect, and the biggest hurdle facing the Johnsons’ group, Elenowen, today might be fighting The Civil Wars for ticket sales or Taylor Swift opening spots.

The follow-up to their debut album, Pulling Back the Veil, is a self-titled EP, released on May 29 in an effort to keep building their fanbase as they work on their sophomore collection. The EP is their first release after a relatively successful stint on NBC’s popular singing competition “The Voice,” where their initial audition made both Blake Shelton and Cee-Lo turn around in their novelty chairs.

They return to the intimate Uncle Slayton’s on Friday as headliners, having previously opened for The Vespers there last August. “It seemed to be a really cool space,” says Josh, noting that it serves their interest in connecting directly with the audience. “When we first started, we were doing more folk/Americana with a pop element, via the indie singer-songwriter route. And then when we were on the show ‘The Voice,’ a lot of people thought we were country. We never really wanted to be, that wasn’t who we actually were inside, but we thought we’d give it a shot on the show and recorded some songs, and just kind of realized what was most natural for us was the singer-songwriter, indie folk-rock sound. We’re still trying to figure out what that is and learning as we’re going, honing our craft.”

Both of the pair, who initially met as teens, pursued music independently for a while but found their niche working together. Much of their current work includes detailed songs about the ups and downs of relationships, even when they co-write with Nashville hired hands.

“On the first record, when we were making it, it was an experiment. I had songs I had written, Nicole had songs she had written, and we wanted to make it one cohesive sound. That’s why a lot of the songs are pretty different, because they were written separately,” says Josh in response to a comment about how the first album veers at times between big productions and smaller-scale acoustic performances.

“Now we’re writing more as a duo; it’s more of a one-person sound with more of an emphasis on the small and acoustic. There’s still that dynamic of pop in the music, but we’ve pulled it together better than on the last record.”

But in case she ever needs it, Nicole has a back-up plan: stylist.

“Fashion is right up there with music for me. It’s a passion, and I love it; I hope to be doing more with clothes and styling,” she says. “It’s nice to be able to put together looks for Josh and I … it’s fun!”

Josh credits Nicole with expanding his horizons when it comes to fashion, joking, “Now, I’m dressin’ all by myself!”

Fashion aside, they’re continuing to sharpen their sound while writing the important follow-up album, hopefully arriving early next year.

The pair hasn’t started living like pop stars yet. They continue to live in Nicole’s parents’ basement, as they have spent most of the past couple of years traveling. “All last year, when we got off the show, we spent a lot of time in the studio, and really building the sound that we want to build our career around,” Josh says. “If we’re gonna be on the road, we’re not gonna pay a mortgage on a place we’re not living in. It’s not worth it.”