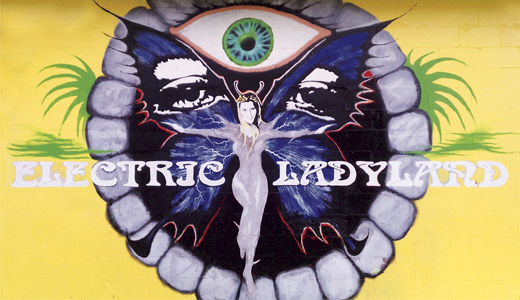 Though ear X-tacy has come and gone, Electric Ladyland is alive and groovy thanks to fans of classic rock and bongs.

When Karma Records shut its doors decades ago, middle-age burnouts turned to Electric Ladyland, shunning ear X-tacy as “the new place with all that rap shit.” Electric Ladyland has defied all odds to become Kentuckiana’s premier must-visit location for the sale of used cassettes, the medium of choice for Ladyland loyalists. Whether you’re looking for badass Boston or that sexy Linda Ronstadt, this store could be for you, assuming you own a functioning tape deck, or are in need of a Hendrix poster, tie-dye tapestry, or detoxification kit for your upcoming drug test.

Clerk Richard Rhodes said in an exclusive interview, “A lot of people think we must be selling drugs here. ‘How else can you be paying for this prime location?’ they ask. I dunno, maybe it’s all the paraphernalia around, but people are convinced that we sell dope, not just a lot of musical recordings from the 1970s.”

Customer Becky Bizer, 29, told a reporter she was visiting the store for the first time in many years. “I think the last time was when I was 15, when my mom used to drive me everywhere. She insisted that we pick up ‘the new Phil Collins tape,’ even though it turned out to be a greatest hits collection and only available on CD. She told the guy she didn’t have a CD player because it was ‘just a passing fad.’ I guess she was kind of right about that.”

Harrell, who has found buying birthday gifts for her mother increasingly difficult with each passing year, settled on a gift certificate. “The tapes here are so cheap,” she said, “$20 might be too much."