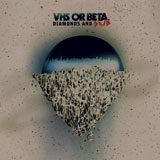 VHS or Beta recruit the next-big-thing producer Jacques Renault and former-big-thing engineer Mark Verbos to strip tracks from their album Diamonds and Death. The result is a collection of solid club disco, the kind that has been steadily creeping into the mainstream for a number of years. Each track is expertly restructured for maximum impact on the more discerning dance floors. The record triumphs when the studio team’s respective talents for creating outstanding rhythms and melodies come together on tracks like “Watch Out Dub” and “Jellybean Dub.” Diamonds & Dub shows that music doesn’t need to be laden with vocal hooks in order to be engaging.