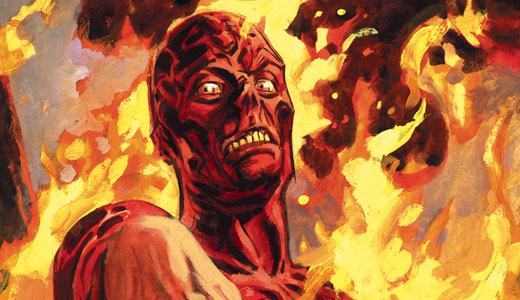 It’s a good weekend to get your nerd on. Derby City Comic Con returns to the Convention Center, and it’s bigger and better than ever. With an always expansive roster, the Con is a who’s-who in today’s independent comic scene. Scheduled to appear are Scott Mallory, author of “Tales of a Washed Up Never Was”; Justin Stewart, artist, letterer and co-host of “Beaucoup Pop”; and Daniel Butler, artist for the critically lauded online comic “Copernicus Jones: Robot Detective.” Last year, more than 3,500 attended the show, and with a line-up like this, they will most likely surpass that.

Also on the bill are the guys from Pinwheel Press, a collective that consists of Craig Partin, Stuart Berryhill and Louisvillian Jonathan Swinney. In May, Pinwheel launched what will be their flagship title, a sinister, violent comic called “Man of God”; this weekend they’re releasing their second issue. Swinney, a mechanical engineer turned comic maven, took some time to sit down with us and talk about Pinwheel and the critically acclaimed “Man of God.”

LEO: Is “Man of God” going to be a long-lasting title for Pinwheel, or is this a miniseries or single story you were looking to tell?
Jonathan Swinney: Right now it’s being billed as a six-issue miniseries, but we’ve already got the next six issues planned after that. That six number came as a suggestion from our publisher, but Craig has it scripted out to issue 50.

LEO: This is not a comic book for kids, right?
JS: Definitely not a book for kids. There is a panel of nudity, there are four-letter words … and every curse word in the book highlighted for shock value. It’s definitely not for kids, but I’ll leave it up to the parents — because, like I said, there are curse words in it and a healthy dose of violence.

LEO: There are aspects of the first issue that seem deliberately vague. Why was that?
JS: Right. One of the reasons we wanted the story to be a little vague is because this character, John Morris, wakes up with no memory of who he is and third-degree burns over 95 percent of his body except for his hand. So we wanted it to be a little vague so that as the story goes on, the reader gets to learn along with him as he figures out his own story.

LEO: Your main character, John Morris, doesn’t say a word in the first issue … it’s almost all internal dialogue.
JS: In the Pinwheel Press universe, dead is dead, and physics matter. He was burned over 95 percent of his body and he obviously inhaled some smoke and flame and screwed up his vocal cords. It’s going to take him some time to figure out how to use his vocal cords in the state they’re in. We will hear the character speak … but not for a while.

LEO: I see echoes of one of my favorite comic books of all time, “Preacher.” Were you inspired by that book or maybe the work of Robert Kirkman?
JS: A lot of people ask me if the main character is a “Ghost Rider” type of thing, where he makes them feel the evil and they can’t handle it and then they (kill) themselves. That’s really not what it is … I can’t say without ruining it … but it’s definitely not what you think it is. I mean, I’ve been reading comic books for 25 years, Craig and Stu are the same way — we didn’t set out to emulate anyone’s style. It’s just being fans, there isn’t one influence that made us write the books the way we did.

LEO: Does the sixth issue of this run end on a cliffhanger?
JS: Yes … it will definitely be a “What the fuck?” moment.

LEO: How long have you been working on this?
JS: We got together in 2009 doing a web comic for Valiant Press. Then Craig said he had this idea, and we loved it. This first issue has been really two years in the making, where we could do it financially and press the best book we possibly could.

LEO: What has the feedback on the first issue been like?
JS: The independent comic scene has embraced us with open arms. Everyone who reads it really likes it; it’s just about getting it out there. There are so many independent books out there that aren’t good, it makes it hard when you have something you know is good.