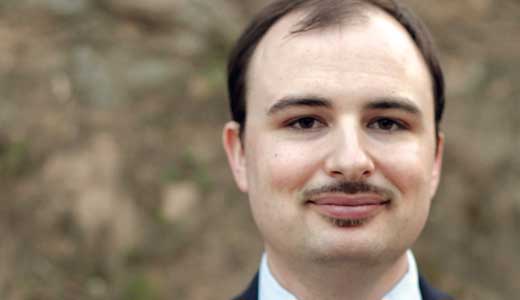 When Jesse Thorn was in college, he made a decision that would determine the direction of the rest of his life (so far). Fortunately, he didn’t drive drunk into a shopping mall or knock up a one-night stand … he became the host of a non-commercial radio program, “The Sound of Young America.”

“When I named it, as a 19-year-old, it was sort of a jokey reference to how we were anything but ‘The Sound of Young America,’ what with being on a college radio station in Santa Cruz at 7 o’clock in the morning. And it was an allusion to the legendary slogan of Motown Records. An allusion that, it turned out, absolutely no one got.”

Today, at 31, Thorn and his program have evolved from an anything-goes collection of whatever worked into “Bullseye,” a weekly, nationally syndicated hour of interviews and reviews. As a host, Thorn, too, has grown. While he also stays active in sketch comedy in his current home of Los Angeles, his skills as an interviewer have earned comparisons to “Fresh Air” host Terry Gross — and, simultaneously, Conan O’Brien.

One way “Bullseye” differs from other NPR-type programs is how it revels in some of the freshest, most up-to-date pop culture talk, especially for those 40 and under. Unlike “Fresh Air,” a listener is often likely to hear a discussion of hip-hop, or a review of video games. Still, Thorn and his staff are just as excited about legendary figures like comedian Bob Newhart or filmmaker Werner Herzog as they are about inventive keyboardist Robert Glasper or absurdist comics Tim & Eric.

“It’s funny, I think that to some people, our guests are epically legendary,” Thorn says. “To many, they’ve never heard of any of them. We always go for the best guests we can book, rather than the best-known guests we can book, and so we end up with people like Glasper or Herzog — who are absolutely revered, but to a narrower group of people. My hope is that if you bring together enough people like that, the audience starts to trust you.”

“Bullseye” is also available as a free podcast, part of a very mini media empire Thorn has established under the banner of Maximum Fun, which includes four other podcasts and annual fan conventions. “At parties, though, it’s easier just to say, ‘I’m a public radio host,’” Thorn says.

LEO: Programs like “This American Life” and “Bullseye” suggest a direction that public radio should be evolving toward, as the older generation … uh, you know, dies off … but it seems like we’ll have a gay president before NPR’s stuffy image has been completely changed. Do you agree? Do you have a solution?
JT: I think that (“Life” host) Ira Glass and his brilliant team inspired a new generation of public radio talent in a way that the “Car Talk” guys or Robert Siegel, wonderful though they are, weren’t going to. (I genuinely love the “Car Talk” guys and Robert Siegel, don’t get it twisted.)

We’re just seeing the fruits of that now, really. “Radiolab” is a great example — there’s no doubt that (host) Jad (Abumrad) was inspired by Ira, but he took his background in music and combined it with Robert Krulwich’s experience as a brilliant, innovative science reporter and made something so special and new. Or Roman Mars, who makes this perfect little show about design called “99% Invisible.” Or Nate DiMeo, who makes a spectacular little narrative show about history called “The Memory Palace.” Or the folks who are making “Planet Money,” and changing the stylebook for news reporting in public radio, which is most of what public radio does.

The big difficulty is still finding the money and airspace. I think that’s tougher. It’s a very diffuse system, and very risk-averse, and kind of stuffy. But it’s a lot better than commercial radio. I mean, yeesh, have you listened to commercial radio?