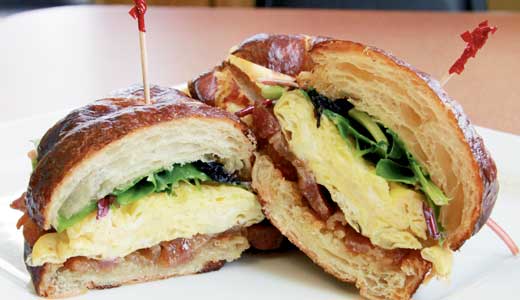 You’ve heard of the South Beach diet. You might have tried the low-carb Atkins diet. Wannabe cave persons swear by the Paleo diet, and the wealthy are all about the Hamptons diet. There’s a trendy diet plan for just about everyone who wants to shed a few pounds in this age of high-fructose corn syrup and super-sized meals.

And now, let’s put our hands together for the Brownsboro Road diet!

I’m not talking about the city’s plan to improve traffic along lower Brownsboro near the infamously monikered “Dirty” Kroger, wherein we are assured that narrowing traffic from four lanes to three — a “road diet” in civil engineering terms — will not only make room for a sidewalk but actually make traffic flow better.

No, this Brownsboro Road diet is all about eating hearty comfort food, and it’s simple: Enjoy your morning meal before 11 a.m. (and all day Sundays) at SuperChef’s Breakfast. Then return for lunch or dinner at Chicago Gyros. Or you could simply stay, as these two fine, locally owned and operated eateries occupy the same bright, spartan little building right in the middle of the Brownsboro traffic diet’s proposed three-lane stretch.

What’s more, if you’re really concerned about things dietary, you’ll be delighted by the wall-size menu at Chicago Gyros, where the Mayor’s Healthy Hometown project coughed up the funds for a slick poster that lists the calorie content of every item on the menu. (A Cheesy Mediterranean Gyros is 1,026 calories? Yikes!)

Breakfast
Let’s start with a morning visit to SuperChef’s Breakfast, a creative concept of Sullivan University culinary grad Darnell Ferguson and his associate, Ryan Bryson. At the tender age of 25, Ferguson, the “SuperChef,” has worked at Napa River Grill, Proof on Main and the Seelbach Hotel, and he joined Sullivan’s chef team cooking for the U.S. athletes at the 2008 Beijing Olympics.

Looking for a modest way to get into the restaurant business on their own, the guys came up with the idea of sharing space with an existing eatery that otherwise would be dark during the prime morning hours. It started last month with the Chicago Gyros partnership. I’m told they plan to add a breakfast operation at Seafood Connection in St. Matthews soon, a short-order destination that will open early enough to catch the late party crowd in the growing nightclub zone.

We dropped in for breakfast on a recent rainy morning and left well fed. The menu features a dozen short-order morning options, using Kentucky Proud meats and local produce, ranging in price for $5.99 (for the grits or beignets and coffee) to an affordable $9.99 (for the SuperChef’s breakfast platter).

Frankly, I am just as glad the breakfast operation doesn’t participate in the calorie-disclosing menu, or I might have been scared off without enjoying the silken, seductive richness of the cheesy roasted red-pepper grits ($5.99 with a pretzel croissant grilled in delicious creamery butter).

A bacon (or sausage) omelet ($7.25) was golden, firm yet fluffy, accompanied by a light salad and a mound of crisp, grated hash browns even better than Waffle House.

With fresh, strong coffee served in oversize ceramic cups, we got away for $20 including tip.

Lunch
Too full for lunch that day, we returned later to check out Chicago Gyros, which has changed owners since my last visit. New management has spiffed the place up a bit, adding a few more tables to accommodate maybe 20 diners.

The menu has expanded, too, going beyond gyros, falafel and hummus to add a Philly cheesesteak, Italian beef sandwich, Vienna hot dogs and wings. It ranges in price from $4 (for a grilled veggie sandwich or veggie “pizza” built on a pita) to $9 (for the Italian beef as a “meal” with fries and soft drink). If you must know, it ranges in calories from 391 (for the $4 veggie sandwich) to the aforementioned 1,026-calorie cheesy gyros.

We split a Greek salad ($5.50 and a mere 450 calories) and got a particularly fine specimen, chopped romaine tossed with sliced plum tomatoes, lots of tangy banana pepper slices, a generous ration of crumbled feta, and bits of chopped onion, green pepper and cucumber, all of it dressed with a tangy oil-and-vinegar dressing.

The “traditional” gyros ($5.50, or $8 if you choose the drink and fries option; 843 calories) was OK. Thin-sliced grilled lamb was arranged on the side of a smallish no-pocket pita round toasted semi-crisp, making it impractical to fold and eat out of hand. It was dressed with slices of romaine and an almost over-generous portion of yogurt-based tzatziki sauce.

I was more impressed with the falafel ($5, and a whopping 977 calories, probably due to frying), which consisted of three crisply fried falafel discs, greenish with herbs and redolent of chickpeas and sesame, served like the gyros with lettuce and tzatziki.

A shared lunch racked up 1,135 calories each, more than half an adult’s recommended daily intake. Dollar for calorie, though, it packed a heck of a bargain at $14 and change for two, plus $3 for the tip jar.