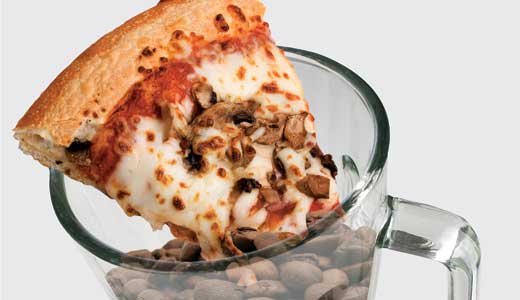 “If you can’t beat ’em, blend ’em” should be the motto of “Piffee,” the new smoothie shop that opened on Bardstown Road last week. Looking for a niche, the store’s proprietor, Joy Soft, decided she’d take the best parts of the Highlands and literally blend them together. The result: the pizza and coffee treat of the store’s namesake. “I took a Wick’s supreme pizza and mixed it with a cup of Heine Bros. special blend coffee — and ta-da! — this amazing dessert took shape. In fact, it could probably also double as dinner!”

Soft is working on other concoctions to add to her eclectic menu. So far, she’s got a cupcake and beer smoothie called “Beercake”; a bagel and frozen yogurt blend called “FroBro”; and a liquor store/Irish bar mix called “Irish Town Lickmores.”

Rum files discrimination suit against NuLu: ‘Why’s it always gotta be about bourbon?’

Not everyone is on the bourbon kick. In a lawsuit filed on Wednesday, Captain Morgan Rum slapped NuLu with accusations of discrimination, saying the trendy art and food district only pushes bourbon and not the rest of the spirits, most notably, rum. “We just want equal footing in the district,” Morgan said. “It’s all ‘bourbon this, bourbon that.’ Why’s it always gotta be about bourbon? Rum is a product, too, you know? Not everyone likes whiskey, and those people should not feel ashamed if they order something different and tropical and delicious.”

When reached for comment, the members of the NuLu neighborhood council laughed out loud. “Are you kidding me?” asked Gill Holland. “Rum has every coastal city in the world! We only have about four or five blocks in Louisville, Ky. Sounds like we need a Jim Beam/Captain Morgan death match!”

“Bring it on,” said Morgan with an evil grin. “I’ve got swords. What does Beam got? New charred oak barrels? Whoopi.”

A NuLu street festival is currently being planned around the duel.