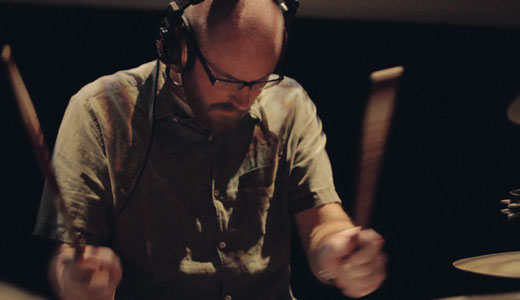 LEO: Your Facebook bio states, “Interstates has existed since 1995 and has been playing live shows since 2006.” Perhaps we should begin with an explanation of that.

Alex O’Nan: I guess that may be a bit of an overstatement. I’ve been writing electronic music since ’95 under various names, one being Interstates. In 2006, it became a real band by adding drums and guitar to the electronic music, and we started playing out — so that’s when Interstates, as it is now, started.

LEO: What scene are you part of? Who you down with?

AO: We are in the kid scene. We are down with Bubble Guppies, the Fresh Beat Band, and Little Einsteins. Neil has three under 6 years old, I have two under 3 years old, Brian has a teen and a pre-teen, and Shane is a pre-teen.

LEO: Which is your favorite state?

AO: Other than Kentucky? Utah.

LEO: Why do you keep forgetting to add lyrics to your songs?

AO: We prefer to let the instruments do the singing for us. It’s a little more challenging to write instrumental music, and it limits our audience, but it’s what we like. It’s not because we don’t have good voices.

LEO: What do the members do for work?

AO: Neil is a producer/engineer, Shane splits his time between producing and working at Four Pegs, Brian is a fire inspector for the city fire department, and I conduct trains.

LEO: I know Shane also plays in House Ghost. Does anyone else play with others?

AO: Brian was in the Muckrakers, I’ve played in several bands over the years, and Brian and I play with Dirt Poor Robins, which is Neil and his wife Kate.