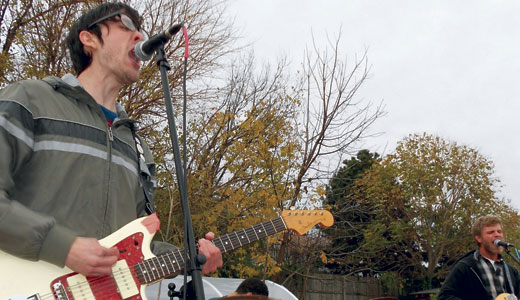 Jim Marlowe is a busy guy. He runs a new store, Astro Black Records, and his band, Tropical Trash, released a five-song 7”, Fear of Suffering, on the local Sophomore Lounge Records this spring. They also contributed a song to the compilation Pocket Transistor and play the Louisville Experimental Festival at Zanzabar on Saturday.

Jim Marlowe: We’ve only got a few left of this record.

LEO: How many did you make?

JM: 200. I’ve never had that happen. Usually, your band has stacks of your old records, and it’s like, “Do I have anywhere to put them?”

LEO: This is more structured than past releases, not as experimental.

JM: Yeah, this is more like a punk record. We were kind of trying to mix the two together. We’ll go to our practice space, and we have everything set up so we record everything that we do. There’ll be totally weirdo jams which you can’t ever replicate — that you wouldn’t want to, necessarily — but that stuff’s really cool, so we try and mix ’em together.

We recorded this in my old house, in my basement. The A-side is just a practice that was going well. One take, we did it live, and (we said) “Oh, cool.” I think they just turned out well. These sound good together. We tried to jam as much as possible on, ’cause we’re cheap (laughs), so it spins at 33. It’s maxed-out, pretty much, time-wise … everything they tell you not to do with a record … It’s kind of trashy anyway, so it’s not Radiohead or something. It doesn’t have to be pristine.