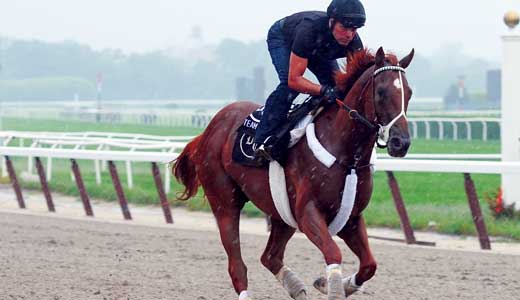 I’ll Have Another can write his name into history Saturday at Belmont Park. With a victory in the 144th running of the Belmont Stakes, added to his triumphs in the Kentucky Derby and Preakness, I’ll Have Another would become just the 12th horse in history to sweep the American Triple Crown — and the first to do it in 34 years.

But the horse doesn’t care anything about that. Probably can’t even read history books. All I’ll Have Another cares about is running — and winning. He’s never heard of Sir Barton or Citation, or even Secretariat. But you can bet that I’ll Have Another is champing at the bit right this minute to run like hell and win.

But he’ll know this Belmont is a big race. The best horses sense the excitement in the air and thrive in the electricity. I’ll Have Another will wake up Saturday morning in New York ready to run.

And cool with all the fuss. Planes. Vans. Change of barns. Mobs of people. Close quarters. Clicking cameras. It’s all OK with I’ll Have Another. He doesn’t twittle nervously. Doesn’t spook. They played “My Old Kentucky Home” at Churchill Downs and “My Maryland” at Pimlico, and he “didn’t turn a hair,” as they say. Saturday it’ll be “New York, New York” blaring over the speakers. Up in the stands, traditionalists will lament how nice it was when they used to sing “The Sidewalks of New York” before the Belmont Stakes. You know, “East side, west side, all around the town …”

But the horse won’t care.

Maybe he belongs in the hallowed halls with Triple Crown winners Gallant Fox and Omaha, and Seattle Slew and Whirlaway. Maybe not. Maybe he won’t win.

But maybe he will.

Likes a game, wants to win

All around, I’ll Have Another is a thoroughbred racehorse in the grandest sense: fast, sleek, athletic, beautiful — and possessed of an indomitable will to win that defines the best of the breed.

“He’s always displayed an amazing stride for his physique,” says trainer Doug O’Neill, who’s been I’ll Have Another’s “coach” since the Kentucky-bred son of Flower Alley arrived in California last year to begin his racing career.

O’Neill is a hoot. He’s the worst-dressed but best-talking trainer to come along in quite a while. He’s been crossways with racing rules at times (accruing fines and a suspension for medication-related violations), but everyone can see he’s good for I’ll Have Another.

“When he went wire-to-wire in his first race, and did it the way he did, that was a sign to us he was a special horse,” O’Neill says. “And then I think in the Kentucky Derby and Preakness he really showed that he wanted to get there first. It’s something you can’t train, you can’t breed. They just have it.”

Certainly there’ve been quite a few attempts to win the Triple Crown in recent seasons. What happens, we think, is the horse that wins the Kentucky Derby is sharp. Two weeks later, he’s still sharp, and bingo, he’s got the Preakness, too.

But then comes the Belmont. Some people think there’s a Racing God who is picky about which Triple Crown hopefuls belong with the likes of Assault and Citation. Probably that was the case in 2002. Probably didn’t think War Emblem belonged on the same list with War Admiral. But mostly, it’s the distance that gets ’em: 1 ½ miles.

Retired riding great Steve Cauthen, who won the last Triple Crown with Affirmed, in 1978, thinks I’ll Have Another stands a chance.

“This horse looks like he’s got that same fighting spirit as Affirmed,” Cauthen told Associated Press writer Rich Rosenblatt. “He likes a game, and he wants to win, and he can’t wait to get another battle. He thrives on it — and to me, that’s why, more than anything, he’s got a good chance.”

A fighter, indeed. And smart, too.

In the Kentucky Derby, the chestnut colt fired straight out of the starting gate full of run — but not running wildly. Through the stretch the first time, I’ll Have Another and jockey Mario Gutierrez calmly found ideal racing position — seventh in a field of 20 3-year-olds — just behind the front-runners, but ahead of the dawdlers. The horse slid smoothly into position, with clear racing room front and back, left and right, like a skilled car driver accelerating smoothly from the on-ramp into the fast flow of the expressway.

Then waited on his rider. Follow a horse. Get closer. Swing outside. Then switch leads and drive for the wire. “Riding I’ll Have Another is like riding a very expensive American sports car with a lot of gears,” says jockey Mario Gutierrez.

And the horse seems to know these races run around two turns, with a long stretch to the finish. That’s when you see the best of I’ll Have Another, according to O’Neill: “At mid-stretch, the way he drops his head and really starts reaching out.”

All about the jockeys?

Of course, I’ll Have Another could get beat. They all can get beat.

The “New York” horse is Union Rags, whose biggest race came at Belmont Park last year in the Champagne Stakes. New Yorkers have had the bubbly on ice ever since but haven’t been able to pop a cork.

Trainer Michael Matz feels Union Rags experienced road trouble when third in Florida Derby and seventh in the Kentucky Derby. “All we want is a clear run at it,” Matz says.

But Union Rags has always seemed to be a horse that does better going shorter rather than longer. A better-odds trifecta horse, in fact, might be long shot Street Life, who could be third.

Trainer Dale Romans thinks his horse Dullahan is the chief threat to I’ll Have Another, and he’s probably right.

After coming from well behind to win the Blue Grass and finish third in the Derby, Romans says Dullahan might be closer to the pace in the Belmont.

“If you go back in history, you need to be very close turning for home,” Romans says. “There hasn’t been a deep closer that has circled the entire field from the eighth pole home and won it. That being said, I think my horse is versatile enough and we have a good jockey on board (Javier Castellano) who knows the racetrack, and he knows where to put him in the race.”

Race riding could be a factor. It certainly was in 1979, when Spectacular Bid’s Triple Crown bid fell apart under jockey Ronnie Franklin. Clever New York riders pretty much took Franklin for a ride. They showed him Times Square and Greenwich Village, then dropped him off at the subway to find his way home.

That could happen to I’ll Have Another’s rider, too. You can’t underestimate New York jocks. Mario Gutierrez is a newcomer to big stakes race riding, but he’s made all the right moves with a horse he obviously fits. “This isn’t about me,” Gutierrez says. “I’ll Have Another is an amazing horse.”

But you could bet a straight $20 at 1-2 to get back $30. Then take yourself out on the Sidewalks of New York (or Louisville) for a toast or two to I’ll Have Another.

The Belmont Stakes will be run at approximately 6:40 p.m. Saturday and airs on NBC.