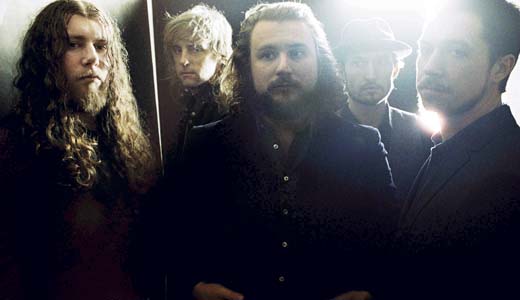 I can think of no better way to start summer than with some wonderfully melancholy indie pop under the stars. And that’s exactly what you’ll get as The Shins kick off Iroquois Amphitheater’s upcoming season, which will include a Summer Concert Series featuring Gov’t Mule, Rufus Wainwright and Brandi Carlile, just to name a few, as well as free movies after dark.

Jeffersonville Smokin’ on the River BBQ, Blues and Brew Fest

The highlight of this fest is the national barbecue competition, sanctioned by the Kansas City BBQ Society, in which teams vie for the championship trophy and the $8,500 prize. And as they’re smokin’ their meat, you can enjoy live music by the likes of the Tarnations Blues Band, Josh Garrett, da Mudcats and more, lots of tasty food, a beer tent, and a Pig Toss Corn Hole Tournament. Jeffersonville has never seemed so juicy.

There’s no such thing as too much BBQ and beer, right? Throw in some live music and a little friendly competition and you have yourself one hell of a party. BBC St. Matthews is hosting this amateur BBQ competition, during which spectators can eat, drink and be merry while listening to the blues.

More than two-dozen restaurants are stepping up to offer samples of their finest dishes for the 20th anniversary of Taste of Frankfort Avenue. Along with food and beverages, there’ll be live music by Nathan Salsburg, Joan Shelley and Hog Operation, as well as a silent auction that helps fund programming at the Clifton Center.

The centerpiece edition of this perennial free series features the perhaps unintentionally diverse bill of New York’s hip and moody rockers The Walkmen, Minnesota’s bluegrass-inspired Trampled By Turtles, and, splitting the difference, the more raucous These United States. Come back for more live music in July, August and September.

Held in conjunction with Crescent Hill’s Old-Fashioned Fourth of July Celebration, this fair and fest will offer more than 90 artist booths, lots of live music, a food court, pet show, cake wheels, children’s games … let’s just say this place will be overrun with fun. Fireworks will cap off the festivities at 10 p.m. both nights.

Shakespeare in the Park

Come mid-summer, you’ll likely be due for a little culture. So put down that smut novel, pack a cooler and get to Old Louisville’s Central Park, where the Kentucky Shakespeare players will kick off this season with “Much Ado About Nothing.” In August, they’ll perform Shakespeare’s dark comedy “Measure for Measure.”

Tickets are already going fast for the 10th edition of what has become Louisville’s biggest music festival. Healthy hometown heroes My Morning Jacket headline and are helping curate the lineup, which currently boasts 70 or so acts from various genres, specialties and abilities. There will be rocking, and even more dancing, and at least one guy calling himself a captain.

How it took 11 Louisville Lebowski Fests before Chicago’s legendary two-dozen-strong marching band/punk/classical/jazz/spazz attack Mucca Pazza appeared is a mystery best left for Donnie. Filling the Jimmie Dale shoes is Todd Snider, a modern heir to the Guthrie and Outlaw legacies. Oh, and the movie and the bowling and the costumes and the contests and the White Russians …

Cows, pigs and people watching, oh my! And let’s not forget about the Krispy Kreme cheeseburger, fried Kool-Aid and a turkey leg as big as your forearm. But you really only go for the concerts, right? Not gawking at the weirdos or chugging lukewarm beer? OK, we believe you. This year’s mainstage lineup includes Hank Williams Jr. (Aug. 16), Journey (Aug. 17, with openers Loverboy and Pat Benatar), Rascal Flatts (Aug. 18) and The Band Perry (Aug. 26). The free concerts are a little less glitzy — the highlights being Cinderella with Sebastian Bach (Aug. 16), Keith Sweat (Aug. 17), Oak Ridge Boys (Aug. 19) and Young the Giant (Aug. 24). Yeehaw!