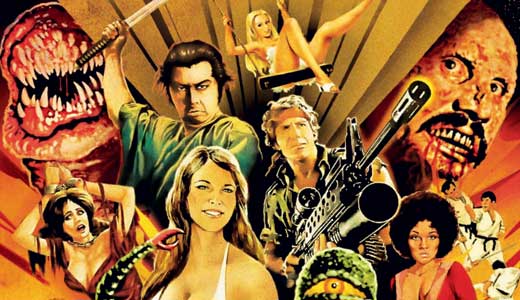 For the sadly ignorant, “42nd Street Forever” is a series of movie trailer compilations, mainly highlighting the lost world of Grindhouses, those seedy, once-great neighborhood theaters that had given up on upscale entertainment to wallow deep into exploitation and sleaze films — and God bless ’em! This Blu-ray edition features all the crazy fun from DVD Volumes 1 and 2 and then some; almost four hours of sex, exploitation, boobs, action, hoochie, horror, butts, sci-fi, and so much more. It’s already become our favorite “party platter.” Highly recommended.

BOBCAT GOLDTHWAIT: YOU DON’T LOOK THE SAME EITHER

Bobcat Goldthwait, the stand-up comic and actor whose brain-dead personae owned much of the ’80s and early ’90s (“Police Academy 2, 3 and 4,” “Scrooged,” “Shakes the Clown,” “Unhappily Ever After,” etc.), has spent much of the last decade working behind the camera, including a long stint as director of “Jimmy Kimmel Live.” Now he’s back with his first stand-up special in a coon’s age, and while you won’t recognize the bum, you will recognize many of the events from his crazy life — like the night he set a fire to a chair on Leno! Terrific.

Another of the “Love Comes Softly” series of family-friendly heart-tuggers made for the Hallmark Channel. In this one, Wes Brown (“True Blood”), Cheryl Ladd (“Charlie’s Angels”) and Bruce “Babylon 5” Boxleitner tell the tale of a family struggling to survive in the Old West who must band together along with the G-rents when mommy dies. A three-hanky weeper if there ever was one.

This nicely chosen trio of vigilante movies all have something to do with prisons, more or less. “Mercenary” is your basic Steven Seagal movie, which means high on butt-kicking entertainment if nothing else. “Death Warrant,” however, is a better-than-average Jean-Claude Van Damme kick-in-the-teether co-starring Robert Guillaume and Cynthia Gibb. The third is Chuck Norris’ famous “get our POWs back from the Viet Cong NOW” actioner that spawned several sequels. A gritty hoot-and-a-half for cheap.

Back in the ’80s, Troma created one of the most disturbing and craptackular killer-rapist movies of all time, a tale of degenerate backwoods brothers kidnapping and murdering innocent young women while Mom eggs them on. This release is the Rebecca De Mornay remake that is at least as nasty, but with much better eye-candy, including Jaime King, Briana Evigan and De Mornay, who at 51 is still one HOT mother! Now on Blu-ray.

Cheap thrills abound in this indie tale of high schoolers — including wicked-nice Jennifer Missoni and innocent Ambyr Childers — who run afoul of a haunted video containing an evil soul looking to break free. May not sound all that original, but has some nice shocks and a few surprises. Worth checking out.

Available on DVD, 2-D Blu-ray and 3-D, this supernatural Japanese horror set in a maze-like hospital ward makes no sense at all — but that’s part of its charm. A ham-handed assemblage of fantasy, reality and jarring time-shifts, it is saved by clever characters with individual motivations, including nearly forgotten long-ago events that set them all on their current dangerous course. Or maybe not … There’s a lot going on here, all of it with a nice “Twilight Zone” feel. We liked it.

Any John Wayne collection is going to come up short — the guy made more than 170 movies, after all — but this one features some pleasant surprises at a good price. Ten well-chosen films from his most productive decades, including Oscar-nominated “The Alamo” (1960) and “The Barbarian and the Geisha” (1958; now available on DVD for the first time).

Rachel McAdams and Channing Tatum are front and center throughout this weepy chick-flick. Why do we say it’s a chick-flick? Well, it’s the tale of a blissfully happy, attractive young married couple in their prime. Then she has a car accident that gives her amnesia and — whoops! — she forgets everything about him. Oh, can he make her fall in love with him all over again, or should he let fate send her drifting away? Waddayouthink? We cried.

A terrific doc about “Love In Action,” the gay “cure” overseen by Tennessee religious fanatics, and 16-year-old Zack, sent there by his parents, who exposed their abuses by means of social media. The international furor that arose led to the camp being closed by the state — until it sued to keep itself open. A painful and touching chronicle of modern ignorance, intolerance and shame. Recommended.

Tim and Eric, whose 15-minute chunks of comedy for Cartoon Network’s Adult Swim run the gamut from dumb to brilliant, give it their all in their first feature-length movie. That’s a long time for their brand of humor, heavy on spoofs of infomercials, crazy characters and weird camera angles, and may not be for everyone. But we enjoyed it immensely, and fans of their late-night TV weirdness will love it.

Skinny Kate Beckinsale dons the leather one more time in this, the fourth in the franchise and the first to be shot in 3-D. With the vampire and werewolf (“Lycan”) clans still embroiled in their centuries-old war, the human race has finally recognized that these supernatural races exist — and have all but eradicated them. Her attempts to separate all the warring factions and save her race is complicated by a new breed of super-Lycan — and the fact that she has given birth to a super-daughter while in cryo-sleep! Would make a hell of a musical.