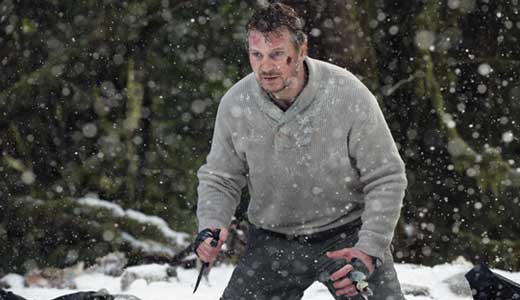 Glenn Close stars as a woman who must pass for a man in 19th-century Ireland in order to find employment. She keeps the charade going with help from Mia Wasikowska, Brendan Gleeson and Jonathan Rhys Meyers. Based on a short story by George Moore, which echoes the lives of the literally hundreds of women who, unbeknownst to the world at large, lived as men in European and American patriarchal societies. A solid drama based on an interesting Fortean topic, with an engaging cast.

Liam Neeson walks through this “modern men at the mercy of nature” suspenser like a lion, silently considering each move before bursting into terrible action. He’s part of a crew of gritty, seasoned oil men who crash in the Alaskan wilderness (one of the best plane crashes ever), and the only one equipped to deal with a pack of intelligent, slavering wolves who pick them off, one by one. A great cast — including Dallas Roberts (who appeared locally in the Humana Festival of New American Plays in 2002), Dermot Mulroney and Frank Grillo — makes this exciting and entertaining as hell.

Now available in a Blu-ray Criterion Edition, this is an exquisite morsel from the team of Spike Jonze and Charlie Kaufman. John Cusack, a forlorn puppeteer, discovers a magical doorway into the brain of actor John Malkovich, which he proceeds to share with others (for a buck). But that’s just the starting gate of this ridiculously entertaining comedy featuring Cameron Diaz, a monkey, Catherine Keener, Sigmund Freud and … John Malkovich! One of the world’s best flicks, now done right.

Big-budget teen sci-fi outing in which three high schoolers touch an extraterrestrial whatzit and — shazam! — gain telekinetic superpowers. The filmmakers lose points by taking this the “found footage” route, ultimately leaving them with no way to end the film. Until then, enjoy the attractive cast — Dane DeHaan, Alex Russell, Michael B. Jordan and especially Ashley Hinshaw — and some really cool scenes as they fly around the Space Needle. Big dumb fun.

Cable channel AMC struck dramatic gold with this tale of revenge set in the days of the Western expansion that followed the Civil War. A former Confederate soldier, Anson Mount, tracks the men who murdered his wife to their lawless realm: the transcontinental railroad they are in the process of building. Along the way, he bonds with a freed slave (Common), and together they engage in the bloodiest, toughest, grittiest, dirtiest, most whore-filled adventure ever seen on TV. Our highest recommendation.

This five-disc set from A&E’s History Channel covers most of Nostradamus’ famous predictions and the history behind them (and by “most of” we mean the made-up crap as well as the real stuff). As entertaining as that is, the best part concerns “Prophecy of the Roman Popes,” a long-secret document that supposedly contains some 400 years of the church’s analysis and exposition on his most troubling visions. Whether any of this is true or not we can’t say, but it is a very satisfying new chapter in the history of precognition. Worth checking out.

A based-on-true-events drama set during the Rwandan genocide of 1994, in which the Grand Mosque of Kigal — normally off-limits to all but the faithful — became a refuge for Muslims, Christians, Hutus, Tutsis, soldiers and targets alike. During their self-imprisonment, love blooms, soldiers question their missions, and a priest has a crisis of faith. Possibly the greatest no-budget film ever made.

MAN ON A MISSION: RICHARD GARRIOTT’S ROAD TO THE STARS

A biography of one of the 20th century’s most interesting people. The designer of many successful video games including Ultima Online, Richard has won numerous awards for technical innovation, gathered meteorites in Antarctica (twice), visited the Titanic, canoed the Amazon, and saved gorillas in Rwanda. But his greatest personal achievement was to follow in his father’s footsteps — to become an astronaut! About as much fun as you can have watching TV.

ONE FOR THE MONEY

Katherine Heigl … do we really need to go on? OK, OK: God’s Gift to Blue Jeans stars in this truly silly chick-comedy about a bright, fearless, newly divorced woman who becomes a bounty hunter to make ends meet. And, of course, her first assignment is to track down former ex-boyfriend, Jason O’Mara. A spot of action and some girlie-thrills, all played for sexy, lighthearted laughs.

Woody Harrelson is awesome in this James Ellroy-penned character study of an immoral cop patrolling a lost L.A. district where survival is the only law. He’s a racist, sexist, emotionless perp-beater who has drawn the ire of Assistant DA Sigourney Weaver and can’t seem to squirm his way back to daylight. If you missed this at the theaters, don’t miss it here; one of the best bad-cop movies we’ve ever seen.

A flawed, if intense, horror film in “The Exorcist” vein, about a woman whose murdering mother was locked away as insane. But a pair of holy men think the mother was simply possessed, as is her daughter, so they begin a noisy and dangerous exorcism to save her soul. We’ve seen worse.

This terrific Limey science series is almost unknown in the United States, which is a crime we’re determined to solve! Tony Robinson from “Blackadder” hosts this reality series on archeology, traveling across Britain, and digging literally in people’s backyards, to show how much exciting history there is just under your feet. This set (series 18!) focuses on that period when the Romans occupied Britain, and reveals the majesty and surprising sophistication of both the Romans and the many British cultures they intended to conquer. Twelve simply wonderful episodes; some of the best TV you’ll see anywhere. Our highest recommendation.